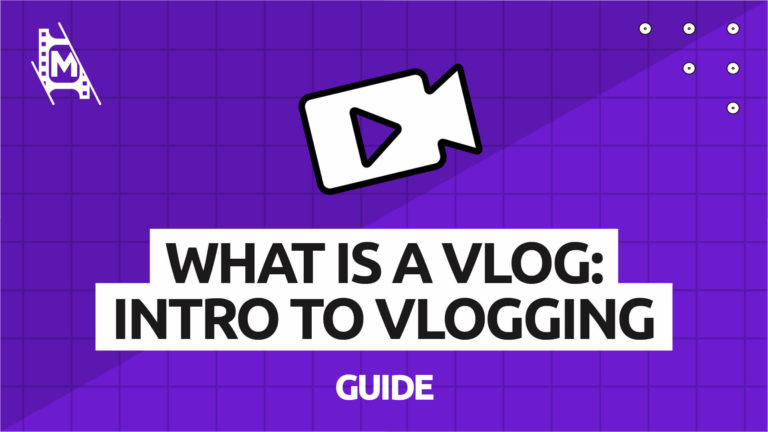 Over the last couple of years, vlogging has seen enormous growth in popularity, becoming a new form of entertainment online. Vlogs have changed the way we consume media and have even given rise to new celebrities. Because of its popularity, many are wondering; What is a vlog and how do I start one?

In the article below, we will cover everything you need to know about vlogging and show you why now is the best time to start a vlog if you haven’t already.

If you want to learn more about vlogging, check out our other articles as well:

What is a Vlog?

The word “Vlog” stands for a video blog or log. Essentially, it is a blog in video format.

As with a blog post, you can make a vlog about almost anything. Vlogs are videos that capture parts of everyday life, like events, opinions, thoughts, and feelings of the vlogger.

A vlogger is a person who creates and shares vlogs, while vlogging is the act of creating vlogs.

The popularity of vlogging has risen dramatically over the last few years. But what has made it such a popular content style?

The large growth is due to several factors but there are three main reasons vlogging has become so popular:

Easy to Get Started – Today, the equipment and cost needed to create a vlog have fallen dramatically. Essentially, anyone can start a vlog with just their phone. This low barrier to entry has been a huge contributing factor to the rise of vlogging.

A Shift in Preferences – The world is not the same as it was a few decades ago. More and more people prefer the quick entertainment that Youtube provides. Shorter, quick, and funny videos are the trend now.

Youtube is the most popular video-sharing platform on the internet. Unlike traditional broadcasting, with youtube, you can watch videos and vlogs from anywhere in the world, on any device, at any time.

Below are a few examples of well-known vloggers on Youtube. As you can see, they vary a lot in style, background, and success, it goes to show that you can really make a vlog about anything.

The Benefits of Vlogging

Vlogging as a content form has many pros. Below are the key benefits of vlogging:

You can Start Today

You do not need fancy setups and expensive gear to get started with vlogging today. You can literally just start with your smartphone camera.

Unlike other forms of media, vloggers have full control over their content. You can decide the style and content of your videos, how often you upload, and what your goals are.

Still, remember that you don’t have full control over the platform you release your content on. You need to respect their rules and guidelines or risk getting your channel taken down or lose monetization.

Today, you have more people watching vlogs than ever before. According to Statista.com, the number of viewers on Youtube alone will amount to 1.86 billion in 2021.

Because of the wast number of viewers, you can build an audience around almost any niche, topic, or interest you desire.

Connection With the Audience

Vlogging gives you many opportunities to connect and engage with your audience through the comment section, polls, and collaborations. Because you have full control over your videos, you can also be as personal and authentic as you want.

Want to Start a Vlog?

If you are reading this and think you should give vlogging a try, we absolutely encourage it! Below are some answers to common questions people have about vlogging and how to get started.

Is it Too Late to Start a Vlog?

This is a common question from people who think starting; Is it too late to start a vlog?

Many think they have missed the boat, pointing to an oversaturated market and high competition in the industry. But, it is definitely not too late to start a vlog today. Primarily because old channels die and interests are changing. There is always an opportunity for new ideas and topics to cover.

Passion and being yourself go a long way to make you stand above your competition. It will take time to start seeing results though, so be patient.

How do Vloggers Make Money?

Most new vloggers dream of doing it for a living. It is not easy, but still very possible to make money with vlogging if you take it seriously.

Below are some of the ways vloggers make money from their videos:

Youtube AdSense – AdSense is the most common way to monetize a Youtube channel by having ads appear on your videos, making you money.

To join the YouTubes AdSense program, you need to fulfill the following criteria:

Affiliate Marketing – Affiliate marketing is when you promote other people’s products, earning you a commission. Affiliate links are a great way to monetize a Youtube channel and it is very easy to get started.

Sponsorships – Sponsorships require larger audiences but are worth your time. Video plugs are the most common type of sponsorship on youtube. You mention a product or brand to your audience, often related to your content, earning you a commission.

Merchandise – You have surely seen many big vloggers promote their “merch” on their channels. Selling merchandise is another way to monetize a vlogging channel. Merchandise could be clothing like t-shirts, hoodies, or wristbands.

Patreon – Patreon is a way for your audience to support you and your creative work. With Patreon, you can earn a monthly income by providing exclusive rewards and perks to your supporters. In turn, your “patrons” can support you through a fixed amount or monthly donation.

Can You Get Rich with Vlogging?

Another point we have to make is this: Vlogging is not a path to quick riches or fame. Serious vloggers spend enormous amounts of work and dedication before they see any success. It also takes time to build an audience, it could be months or even years. Even then, nothing is guaranteed.

If fame and fortune are your primary motivations for starting a vlog, you set yourself up for disappointment. Instead, if you create a channel around something you find interesting or important, and put in the work and effort, you are much more likely to do well.

How to Start a Vlog

If you got this far into the article, you are probably thinking of starting a vlog. Below is a list of what you will need to get started:

It all starts with an idea. You might already have something in mind, if not, we recommend checking out our vlogging ideas list for ultimate inspiration: 101 Creative Vlog Ideas for Youtube

For beginners just starting, vlogging can seem difficult as there is so much that goes into creating a video for youtube. Feel free to check out our Ulitmate Guide to Starting a Vlog.

There is still enormous growth ahead for vlogging in the coming years, and with it, a lot of opportunities for future creators. If you are thinking of getting into vlogging we recommend that you start today.