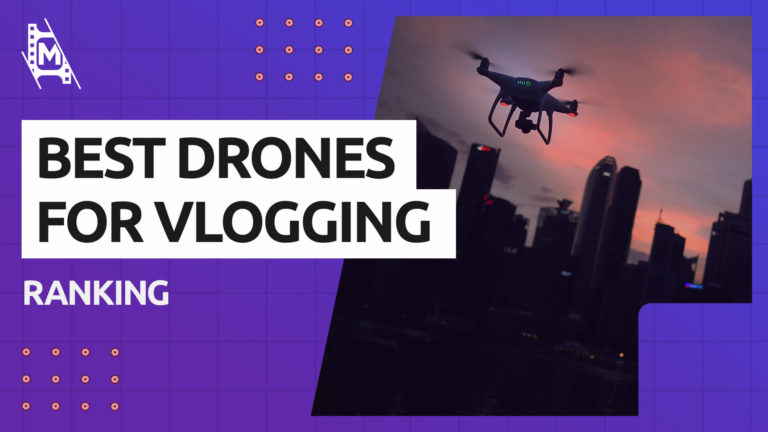 As a vlogger, you know the importance of capturing the best shots. Using a drone will enhance your vlog and help you stand out from the competition. You’ll take your subscribers on a remarkable aerial journey a regular camera can’t duplicate.

If you’re ready to step up your vlogging game, you’ve come to the right place. This article explores the top 5 drones for vloggers based on your experience level, budget, style, and gear.

Things to Consider Before Buying a Drone

Buying a drone for your vlog is a significant investment. Before you go shopping for a drone it’s essential to know what type will best suit your needs.

Advantages and Disadvantages of Using a Drone for Vlogging

One of the main advantages of using a drone for vlogging is that you get to access incredible places you can’t go with just a camera. You can use your drone to capture breathtaking views and share a story that otherwise would be difficult to tell.

While there are many advantages of using a drone for your vlog, there are some disadvantages. Drones aren’t easy to operate. In addition, the legislation surrounding drone use in various jurisdictions is unclear because it is an emerging technology. In some places, it is illegal to fly drones at night for example. Be sure to check the laws in your area before getting started using a drone for your vlog.

How to Choose the Best Drone for Vlogging

Your vlog is unique, and the drone you choose to support your videos must be suitable for your needs. Before settling on one drone over another, keep the purpose of your filming in mind.

You’ll also want to consider your experience with flying drones as there is always a learning curve. For absolute beginners, we actually recommend that you get a cheap toy drone just to practice before getting one on this list, but more on that later.

If the content you’re creating for your blog involves a lot of action, you’ll want to choose a powerful drone with the following features:

If your vlog emphasizes showing or telling a story over action shots, you should prioritize camera resolution, allowing you to get high-quality images instead.

Before investing in a drone for your vlog, it’s essential to understand the range of drones available. Different drones have different uses, go drone shopping without understanding the terminology, and you may end up with a pricey gadget that doesn’t do much to enhance your vlog.

These are the most common drones on the market:

If you’re new to drones, the RTF models will be your best bet. On the other hand, if you have experience flying drones or need more customization, one of the other models may fit you better.

Things to Look for in a Drone for Vlogging

Here are some things and features to look for before purchasing a drone.

Your vlog is a video production, so you want to be sure the drone you buy records videos with superior image quality. Consider purchasing a drone with a 1-inch sensor, which is quickly becoming the gold standard in consumer drones.

Fiberglass and carbon fiber drones are the most durable on the market, but they’re also expensive. If you plan to use your drone frequently, it’s worth paying more to invest in a quality drone. If you’re on a budget, check out drones made of ABS plastic, which is more durable than regular plastic. Aluminum drones don’t hold up well in accidents.

Having a drone that transmits a live feed to an LCD screen built into the transmitter or your phone or tablet is incredibly useful. You’ll be able to view the world as the drone does and capture stunning aerial images for your blog.

How long the drone can stay in the sky is crucial when deciding which drone to buy. A drone’s battery will determine how long it can remain airborne, with most drones averaging 20 to 30 minutes. Some cheap drones can only stay in the air for 5 minutes.

When deciding on a drone, try to purchase one that gives you the longest flight time and takes the shortest amount of time to recharge the battery.

Before flying your drone, be sure you understand the rules governing drone use in your jurisdiction. As a vlogger, you could be anywhere in the world. You don’t want to get into trouble with local law enforcement for not using your drone correctly.

Also, check the weather forecast before going out with your drone. The ideal weather conditions to fly a drone are on sunny days with clear skies.

Just like an airline pilot goes through a pre-flight checklist before take-off, you want to do the same with your drone.

If you take the proper precautions before taking your drone out, you’ll increase your chances of having a successful shoot. When flying a drone, be prepared for anything!

The Top 5 Drones for Vloggers

Now that you know what to look for in a drone let’s take a look at the top 5 drones for vloggers.

Launched in 2018, the DJI Mavic 2 Pro is still one of the best consumer drones on the market. Boasting many advanced photo and video features plus intelligent flight mode, it is one of the world’s most popular drones.

The Mavic 2 Pro is one of the most portable drones with a 1-inch sensor thanks to its foldable design. This makes it a great choice for vloggers who spend a lot of time on the road. There’s a phone holder at the bottom of the controller, and you’ll need the drone’s app to access many of the controls. You can perform many standard functions using the direct access controls.  In addition, the drone comes equipped with GPS, making flying more intuitive.

Verdict – Overall the DJI Mavic 2 Pro is a perfect mix of portability, image quality and controls. No wonder then it is one of the most popular drones on the market.

This functional drone comes equipped with a maneuverable eyeball camera upfront with a 180-degree vertical range, making it the only drone on the market that can take photos directly upwards. The Parrot’s camera can zoom up to  2.8x without a reduction in image quality.

The drone is lightweight and foldable. You could easily carry it in your backpack or purse. The drone doesn’t come with an obstacle avoidance system, so it may not be the best choice if you’re new to drones. The Parrot performs best in open skies away from obstacles, flying at up to 33 mph. Even at this impressive speed, it makes little noice. Thus it’s unlikely to bother your neighbors or others in its path.

Verdict – Image quality is outstanding, coming close to an entry-level DSLR camera. The Parrot takes crisp and detailed shots. If you’re looking to get the best images possible from a drone, the Parrot is worth a closer look.

If you don’t have any experience flying drones and don’t have a large budget, the DJI Mavic Mini could be the best option for you. Compared to the competition, this drone is tiny. It weighs about the same as an average smartphone, making it one of the most portable drones on the market.

You won’t get 4K video with the DJI Mavic Mini. It tops out at 2.7K resolution with a 30fps frame rate. Also, this drone doesn’t come with a screen. Instead, you’ll use your phone to navigate the drone and two joysticks on the controller. While this gives you some fewer controls, it also makes it great for travel or trips where it’s not ideal to carry a lot of gear.

Verdict – This is the ultimate beginner drone on the list. It blends portability with ease of use and quality. Its only real weakness is the lack of 4k video but again, it is a drone that neither requires a lot of space or planning to carry with you.

The Ruko F11 Pro is another entry-level drone designed for people who have minimal experience flying drones. This affordable drone comes with features often found in more expensive models such as a 4K UHD camera, live video transmission, and 30 minutes flying time.

The drone has a compact and durable design, making it optimal for travel. It comes with a GPS module, which allows it to hold its position and altitude when taking pictures or filming. It also features one-touch take-off and landing, making it easy to control.

Verdict – The Ruko F11 Pro is another drone ideal for travel with an agile design and a great price tag. Its ease of use also makes it a great starter drone for beginners.

If you have experience flying drones and are looking for a premium experience, the Autel EVO II might be the drone for you. This drone comes packed with features such as 8K video (4K at 60fps), a modular camera, and 40-minutes of flight time with 35 minutes when hovering.

The controller features a built-in color display; you won’t always have to rely on your smartphone to control the drone. Your phone clamps onto the top of the controller.  Pictures taken with the Autel EVO II are crisp, and the video is stunning.

Verdict – While this drone has a unique look that is not a fit for everyone, it offers excellent video quality and a wide array of features and controls. All of these controls do require a steeper learning curve though, requiring a higher skill level.

We found that the DJI Mavic 2 Pro is the clear winner among these top 5 drones for vloggers roundup. This drone has everything a vlogger needs to produce the best videos and pics for their vlog. It’s easy to fly, boasts 4K video, and features an all-around anti-collision sensor. Plus, it’s highly portable, a must for most vloggers.