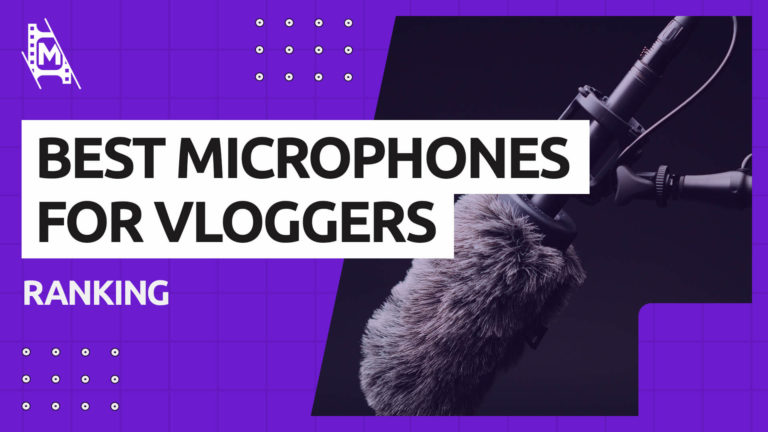 Vlogging has become quite popular over the years, and perhaps you’ve thought about starting one yourself but don’t know what equipment you need. Or maybe you already vlog, but you don’t like your sound quality.

Well, we have the answers for you! Check out our top picks for the five best microphones for vloggers.

Why a Good Mic Is Crucial to Vlogging

Your vlog should have sound and video with the highest quality you can manage, regardless of whether you just want to put your favorite hobby out there or gain a serious audience. Vlogging helps connect people from around the world who share common interests, and it serves as both education and entertainment.

Because of that, you need one of the best microphones for vloggers you can find to give your videos the crisp, clear, professional sound you need to take your vlog to an entirely new level.

What to Look for in the Best Microphone for Vlogging

Audiences tend to be more forgiving of poor video than poor audio. While your camera likely has a built-in mic, it doesn’t have the best quality for vlogging. You’ll hurt your vlog before you even get it off the ground without a quality mic.

In general, you want a separate mic that’s compact so it’s easy to carry around, especially if you want the ability to record wherever you are and not just at home.

Another thing you should look for in a vlogging mic is whether you want to go wireless since wireless mics are good if you need to shoot video from a distance. You can place your camera in one place and carry your mic where you need it without cumbersome cords everywhere.

If your vlog is such that you’ll generally be within six to ten feet of your camera, you can easily use a corded mic. However, be sure that the cord is compatible with your camera, or you can find an adapter that will work. The last thing you want is to spend money on a mic that won’t work for you.

What Types of Microphones Work Best for Vloggers?

The type of mic you want depends on precisely what kind of vlogging you’re doing and the quality of sound you want. There are four types of mics that work very well for vlogging.

These are called “shotgun” mics because they stick straight out like a gun. These are more versatile than any other mic on the market, which makes them a great pick. If things are such that you can only buy a single mic, you should probably go for one of these.

Many shotgun microphones are cardioid mics, meaning they filter out sound from the areas around the mic’s sides and rear. Because of that, you’ll have less ambient noise to edit out later, and your voice and the sounds you do want will come in beautifully.

Whether you choose a boom mic or one you can put on your camera is up to you. With some shotgun mics, you can do both.

Lavalier, or lava mics, are the little ones that you clip onto your clothing. When you think about vlogging mics, you probably thought about these first.

They aren’t unidirectional like shotgun mics are, but they do a great job of filtering out background noise because they’re so close to your mouth that they don’t pick up much else. However, their sound quality isn’t the greatest, so keep that in mind if you decide to go with one of these.

Shotgun and lavalier mics are the two most popular mics for vlogging, but their differences extend beyond their physical appearance.

Handheld mics have some excellent sound quality, but they’re not the cheapest out there. These are the mics you usually see on-scene reporters using, but they require a mixing board to get the best sound out of them.

Depending on what kind of equipment you have and what you want for your vlog, a handheld mic may or may not work for you.

When you see someone on a radio show, they’re usually using a desktop mic. If you’re doing your vlog at your desk like a radio show and you can plug into a mixing board, you can’t beat the quality you’ll get from a desktop mic.

Other Things to Consider for a Vlogging Mic

Many mics that work well for vlogging require more equipment than you might think. For instance, many people believe that lavalier mics are entirely wireless. They come with a transmitter you clip to your belt, but a wire connects the mic to the transmitter.

However, if you experience technical problems, you might lose entire audio sections and have to reshoot the whole thing. Wired mics that need mixers and other recording equipment don’t have that problem.

On the other hand, you might not want to learn how to use mixers or other equipment that some mics require. So while you’re shopping for a mic, keep these things in mind.

The Top 5 Microphones for Vloggers

We looked at many different mics and narrowed the field down to the five best microphones for vloggers, so you have the best idea possible for the best mic for you.

The Rode VideoMic Pro is very lightweight at just three ounces, comes with an integrated shock mounting system, and has a camera mounting shoe so you can take it wherever your vlog takes you. You get excellent sound filtering even in a crowded, noisy room, meaning you can vlog where you need to without having to edit out a ton of background noise later on.

This microphone’s battery has 70 hours of use before you have to replace the battery, plus it comes with a 3.5-millimeter mini-jack for stereo sound, a two-step high pass filter that’s flat at 80Hz, and three-position level control at -10dB, 0, and +20dB.

The Blue Yeti mic comes with a custom three-capsule array suitable for YouTube vlogging or podcasting, among other things. Its four pickups include bi-directional, stereo, and omnidirectional, as well as cardioid, giving it a versatility you may not find with other mics.

All the controls, including audio, headphone volume, pattern selection, gain, and instant mute, are all right on the microphone, minimizing your setup needs. The Blue Yeti also has a unique positioning element – you can turn, tilt, and pivot the mic so it’s precisely where you need it.

This is one of the smallest lavalier mics on the market, which is excellent if you prefer carrying minimal equipment or don’t have much room for something bigger. You can use up to eight of these systems in one place as well.

Specs: 50Hz to 20kHz frequency response / Up to 7h internal battery life / Transmitter and receiver weigh one ounce each

Audio-Technica’s AT 2020 mic is a corded condenser mic with a USB output to allow digital recording. You get a 16-bit, 44.1/48 kHz sampling rate with a simple A/D converter, and it comes with a headphone jack that has volume control so you can monitor sound without delay. There’s also a headphone amplifier to give you quality sound while you’re recording.

At just over 12 ounces, it’s a little heavy, but not so heavy it’s unmanageable, and you get a mix control on the mic that smoothly blends your signal with pre-recorded audio.

Sennheiser’s Pro Audio mic is a unidirectional microphone weighing just three ounces with a universal, cold-shoe camera mount. With interchangeable, 3.5-millimeter TRS to TRRS connectors for both DSLR and mirrorless cameras, you can use this mic without having to worry about buying extra cords.

It has an internal shock mount and integrated wind protection to give you a far quieter recording with less ambient or camera noise, and a foam windshield included to aid in reducing wind noise outdoors.

It also comes with three capsules instead of one, picking up sound from three slightly different positions and melding them into one single, rich sound. Since all of its controls are right on the mic, it’s straightforward to use whether you’re a veteran vlogger or just starting out.

The Blue Yeti is heavy compared to the other mics we have, so you’ll have to compensate for that. Also, while it might require a pop shield, and the shock mount and other accessories aren’t included, nothing is absolutely perfect. You’ll be hard-pressed to find a better mic for vlogging.