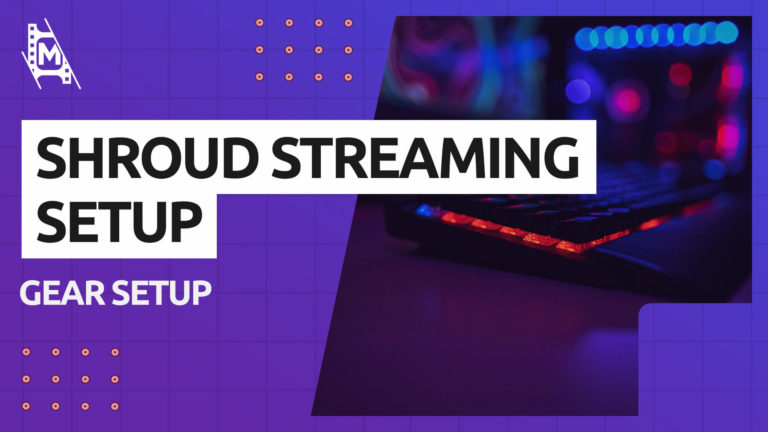 Looking for a breakdown of the Shroud 2021 streaming setup with affordable alternatives? You’re in the right place.

Shroud (Michael Grzesiek), has quickly become a streaming phenomenon with his high-quality competitive gameplay in games such as CSGO, PUBG, and Valorant. Over the past 7 years, he has amassed over 16 followers across Twitch and YouTube and continues to grow.

With popularity comes financial flexibility and Shroud has used this to create an extremely sleek and efficient streaming setup.

PRE-WARNING: Shroud does have some affiliate deals with certain companies and you will see a trend forming as we go through some of the hardware. This isn’t necessarily a bad thing but we will try to steer away from these brands (Logitech) in our alternatives so you get a wide range of information

Alienware hardware has rapidly become the most sought-after gaming hardware on the market. They are predominantly known for their gaming laptops which harness the power of a small nuclear reactor, but they also produce high-end PC monitors.

Shroud has opted for the 27 inch 240hz model which allows him to run his games at 240fps (frames per second). The higher the FPS you can run, the quicker you can react to incoming enemies. This is vital in first-person shooter games which are exactly what Shroud competes in.

Realistically, a framerate of 240fps is well above what is necessary to be able to stream effectively. In fact, most streamers stream at a lowly 60fps which by comparison sounds pathetic but is actually fine performance-wise. You won’t notice any tears or frame drops and can still have a smooth gaming experience.

With this in mind, you might want to shoot for the Nitro XF243Y which has a max refresh rate of 165hz, though we would recommend using it at no more than 120.

It has a complete color range with tear-proof technology and produces a clear and crisp image.

If you need a second monitor for your stream software or chat, you could even purchase a much lower spec monitor like the Samsung CF390. It’s only 60hz but can handle editing software and stream dashboards alike with no problems!

It’s come to our attention that streamers are digging this mouse at the moment. Both Shroud and Ninja currently use the G Pro X and swear by its quality and efficiency. (Check out our breakdown of Ninja’s Gaming Setup here).

The G Pro X is a super lightweight mouse with the sensor specifications of something much larger and bulkier. It is super accurate with Superlight Hero 25K technology and best of all it’s wireless with incredible battery life, making it perfect for streamers on the go.

With competition rife nowadays between tech companies, prices for high-end mice are being driven down exponentially. It is completely possible in 2021 to pick up a cheap but competitive mouse that can compete alongside the best of the best.

The Razer Viper Mini is basically a cut-price replica of the Superlight. At 61 grams and with an optical DPI of 8500 it has a similar specification to the G Pro X and could quite happily hold its own in a competitive environment.

One obvious difference is that the Viper mini is not wireless. It should be said though that not all pros play with wireless tech nowadays and many actually prefer the stability of wired mice so this isn’t really a game-changer.

Logitech never really entered the competitive gaming hardware market until the late 2010s, but when they did they arrived with sleek, well-built tools that could rival any of the high-end and expensive equipment.

The G Pro X keyboard is such a neat little package. Despite its small stature, it packs a real punch with pro-grade clicky mechanical switches and light sync RGB.

It boasts a detachable cable for great portability and has a full in-built macro system for those who want to enhance their gameplay or streaming with macros.

The best part however has to be the price. Coming in at $150 means that the G Pro X is far and away from the cheapest ‘high end’ competitive keyboard on the market and it really moves the goalposts for future keyboard development and pricing.

It’s hard to suggest an alternative to a well-priced and fantastically built keyboard like the G Pro X, but if you are on a budget and don’t want to lose out on too much quality then the Havit RGB is the keyboard for you.

A well-built mechanical key system and ergonomic design mean that the slightly dimmed RGB lights and lack of macro compatibility can be overlooked. This keyboard could hold its own in any FPS competitive environment.

Okay … there is a bit of a pattern emerging here. Shroud seems to either have an unhealthy addiction to G Pro X products or (slightly more likely) an affiliate partnership with Logitech!

It’s no secret by now that headset and microphone combos just don’t make the cut when it comes to audio quality and streaming. Shroud however bucks this trend, with a combo that CAN deliver solid results. The in-built Blue VO!CE microphone filter means this mic can pack a punch when gaming. When creating videos, Shroud sticks to an external XLR mic but swears by this headset as a solid ‘party chat’ microphone.

The G Pro X is also wireless, meaning no crossed cords or unfortunate spillages due to cables. The one downside to this however is that if you forget to charge your headset before a long session, your plans will be more than just a little bit ruined for the next couple of hours!

Other than being a little bulky, the Mad Dog GH705 delivers in EVERY area. It has customizable bass levels and even comes with its own software, in which you can edit the audio output equalization. What’s not to love?

An in-built headset microphone can only get you so far. The Shroud streaming setup resorts to the Shure SM7B for video and audio content independent of the streams. This cardioid microphone with XLR connectivity produces a clean, compressed sound and is widely regarded as one of the best microphones on the market.

Be sure to pair this with a microphone arm to reduce knocks and bumps and give yourself maximum space to work with on your gaming table.

The Tracer Studio Pro is an AMAZING low-cost alternative to high-end microphones, with nearly the same functionality and performance.

As it’s a cardioid mic, only noise created directly in front of the microphone will be picked up, which is good news for streamers in noisy environments.

Due to it being an XLR microphone, you’ll still need a mixer or processing device. In terms of mixers or processors, take a look at the Behringer Xenyx 1002 or the Behringer UMC 22 U-Phoria for good-quality budget options.

Overall, the Logitech C920 camera is one of the most cost-effective webcams on the market. It’s a good substitute for your laptop’s built-in webcam thanks to its excellent 1080p video.

The fact that Shroud and other large streamers are still happy to work with the C920 speaks volumes when there are plenty of more expensive cams on the market to choose from.

The C920 is honestly the best value and best spec webcam out there, there isn’t an alternative unless you want to sacrifice serious quality. The C270 is around $35 but only performs at a 720p 30FPS level which in today’s climate is simply not enough.

Shroud’s streaming setup is noticeably more cost-effective than other large streamers. Despite his savings on gear, his streams still look sharp, clean, and impressive. Maybe we’re finally starting to see a cash-friendly streaming industry on the horizon? We can only hope; a more accessible streaming world is a happier streaming world for everyone!