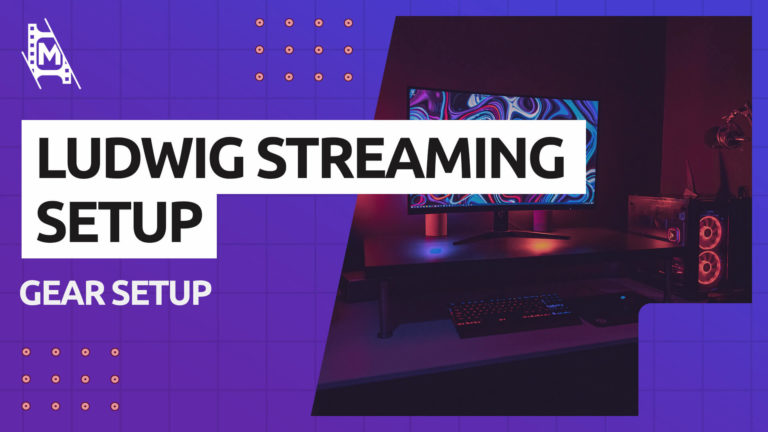 Looking for more information on the Ludwig 2021 streaming setup? Look no further; we’ll break down each piece of hardware that Ludwig uses in his setup and cheaper alternatives for the everyday streamer.

Ludwig made his name as a competitive Super Smash Bros player and built his streaming career around Smash Bros, Mario Party, and Dark Souls. He now is an esports commentator and YouTuber but continues to stream over on Twitch.

Unlike Shroud, the Ludwig streaming setup is extremely expensive. Every piece of hardware is at the top of its range and provides incredible performance.

Alienware has been at the top of the monitor pile for a long time now. The sturdiness of the build and incredible internal hardware make them irresistible for streamers on a large budget. There simply isn’t any other brand out there that makes them as reliable and impressive as Alienware.

The AW2518H is a 25-inch monitor which boasts a 240hz refresh rate, allowing you to play at an incredibly smooth 240fps. The higher your fps, the quicker you see your opponent and this quite obviously boosts your performance in a competitive environment.

One of the best features of the AW2518H is the number of inputs on the rear of the monitor. There are an impressive four USB ports and a total of 8 ports both input and output, meaning it gives incredible value as both a monitor and port extension.

Realistically, a framerate of 240fps is well above what is necessary to be able to stream effectively. In fact, most streamers stream at a lowly 60fps which by comparison sounds pathetic but is actually fine performance-wise. You won’t notice any tears or frame drops and can still have a smooth gaming experience.

Bearing this in mind, you might want to pick up a monitor like the Nitro QG241Y  which has a max refresh rate of 75hz, which is more than enough for a smooth gaming experience.

It wasn’t too long ago that competitive gamers were gaming on 60FPS settings and no one was complaining. It is an absolutely viable setting to game at and still produce a smooth and tear-less image.

Okay, we’re going to put this out there. This might just be the most ridiculously overpriced branded mouse we’ve ever seen. Bear in mind, the original release of this mouse is priced at around $99.

It’s true, the Air58 has a fantastic feel. It’s well-weighted, well vented, and incredibly accurate. In an incredibly competitive market, it performs extremely well around the $100 price point.

Why then, you ask, does this particular version cost almost $600? Is it fueled by rocket fuel? Was it forged in the depths of an ancient Egyptian tomb?

No. It has Ninja’s name on it.

Don’t rub your eyes or pinch yourself, you are reading this correctly. This is the Ninja-affiliated Air58 Mystic Blue and is incredibly rare. Due to low production orders, there aren’t many of them on the market and as such have risen in value exponentially.

This is quite frankly absurd as technically it is pretty much identical to the $100 standard version. We’ll slap a big ‘pass’ on the Ninja affiliated hardware thank you very much.

Identical to the above model, the Ultralight Pro provides fantastic response time and feels fantastic (albeit without the $500 Ninja graffiti).

The honeycomb shell feels surprisingly sturdy and gives great ventilation to the palm of your hand. Two side buttons (which are industry standard now) can be macroed or hotkeys to any keyboard function or key providing additional inputs for your gaming experience.

Go with this mouse over the Air58 EVERY SINGLE TIME. We can’t stress this enough!!!

At first glance, you could mistake this keyboard for a cheap, tacky, portable phone keyboard that you might connect via Bluetooth. In fact, the Ducky One 2 is sturdy, well built, and incredibly responsive.

It’s small, for sure. If you like to be able to use your function keys and Numpad then you will need to look elsewhere, but if your keyboard is purely for gaming and you like to change your setup location regularly then the Ducky One 2 is perfect.

Not only is it mechanically stable but it also comes in at a very respectable and affordable $100. Definitely a steal at this price!

It’s not very often we don’t have a cheaper alternative to high-end products, but as 60% of keyboards go the Ducky One 2 mini is the whole package. It’s cheap, extremely well built, and perfectly functional.

To suggest a cheaper model would mean sacrificing one of these three traits and so to us, it seems the perfect choice for any streamer large or small!

If you’re anything like the average streamer, you stream in a small stuffy room with very little ventilation and your fan turned off for fear of background noise. Add to these fluffy, velvet ear pads and suddenly you’ve turned into a hot mess of a puddle.

Honestly, the Beyerdynamic best suits someone who isn’t in the streaming business. Yes, the sound is incredible. Yes, it’s extremely comfortable. But with the amount of energy streamer’s expend and how hot they can get, this headset could be a serious nightmare.

The 990 Pro is more suited to audio engineers or recording artists. We understand why its included in the Ludwig streaming setup but would be very wary suggesting them to streamers any smaller than Ludwig in size and popularity.

Other than being a little bulky, the Mad Dog GH705 delivers in EVERY area. It has customizable bass levels, 7.1 surround sound and even comes with its own software, in which you can edit the audio output equalization. What’s not to love?

The Shure SM7B is the current industry standard for large streamers, knocking companies like Blue Yeti and HyperX out of the park. This cardioid mic packs an incredibly impressive punch and even has in-built noise suppression, equalization, and compression, meaning that you should have to edit the input very little!

Be sure to pair this with a microphone arm to reduce knocks and bumps and give yourself maximum space to work with on your gaming table.

The Tracer Studio Pro is an incredible low-cost alternative to high-end microphones that offers virtually the same functionality and performance.

Because it’s a cardioid mic, it’ll only catch audio that’s immediately in front of it, which is great for streamers in noisy environments.

Due to it being an XLR microphone, you’ll still need a mixer or processing device. In terms of mixers or processors, take a look at the Behringer Xenyx 1002 or the Behringer UMC 22 U-Phoria for good-quality budget options.

Webcams dominate the video capture device of choice in today’s streaming industry, even with large streamers. They have become so impressive that it’s hard not to recommend a USB webcam in most situations.

If you want 120fps, depth focus, macro settings, and crystal clear colors then you may need to look into a DSLR camera setup via a capture card.

The A7 III is a brilliant option providing all of these features and much more. As previously mentioned, you will need to pick up a capture card in order to use a DSLR as a webcam. We’d suggest the Elgato HD60S.

The C920 is honestly the best value and best spec webcam out there. It will be more than enough for 99% of streamers who want a 1080P 60FPS output and comes in at a handy price point too!

If you want to copy the Ludwig streaming setup exactly including PC build and furniture, you’re going to need some serious savings! For the most part, there are effective alternatives to his gear that will do a very similar job for a fraction of the price.

As a pro commentator, it’s clear Ludwig doesn’t want to take any risks with quality or reliability and has sourced all of his kits from the higher end of the market. Fair play to him we say, the jealousy is real right now!

Want to see how Ludwig’s streaming setup compares to other large, popular streamers? Check out our breakdown of Ninja and Shroud’s setups!