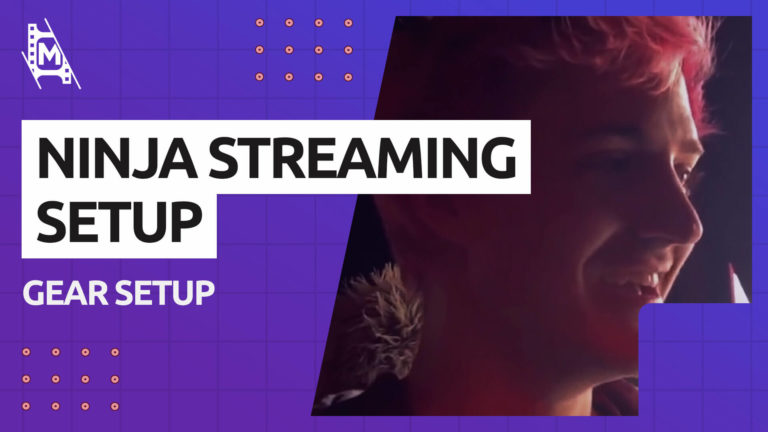 Having found fame streaming Fortnite during its peak popularity, Ninja (https://www.twitch.tv/ninja) has become a household name in the streaming community. He made a move into competitive gaming and stream entertainment and never looked back, having amassed 24 million followers and over 2 billion views on YouTube alone.

To be able to maintain high-quality content, Tyler (Ninja) Blevins has access to the highest quality hardware and his streaming setup leaves many casual streamers swimming in jealousy!

Today we’ll break down Ninja´s 2021 streaming setup and explain exactly why he uses the equipment he does. Additionally, we’ll recommend quality budget Alternatives that you could get your hands on for a fraction of the price!

As an Amazon Associate, we earn commissions from qualifying purchases. Amazon and the Amazon logo are trademarks of Amazon.com, Inc. or its affiliates.

Ninja uses two 240hz 24.5” monitors for his gaming and streaming needs. The HZ level of a monitor enables the gamer to play at a higher FPS rate. More frames per second equal seeing your enemies that fraction of a second earlier than they see you!

IPS technology allows for a 1ms response time giving Ninja a fantastic advantage over his enemies!

For most gamers, a refresh rate of 240hz is above and beyond anything they’d ever require! Head for the Acer Nitro with a 165hz rate for an equally powerful monitor performance at a fraction of the price.

In terms of your second monitor (if you’re using a dual monitor setup), you could pip for something even less impressive, as you’ll probably not be doing much gaming on it. Something like the Samsung SR24R will be more than capable of the job!

Tyler’s mouse is actually surprisingly minimalist. A lot of gamers tend to go with mice that have 5-10 additional side buttons and keys but the Superlight comes with only two side keys and weighs a measly 63 grams.

A gamer’s mouse is probably the equipment they are most protective over and can definitely cause rifts between streamers. Some like theirs with additional weight and bulk for more controlled and smoother aiming whereas others, like Ninja, like their mice lightweight with the ability to throw it around at supersonic speeds.

The Superlight Hero 25K sensor is super accurate, but there are definitely other mice on the market that can compete with this stripped-down pointer.

Throughout this article you’ll notice a common theme; Ninja’ hardware choices are not completely necessary. You can get the job done with much cheaper equipment (but of course, what would Tyler do with all his money?!).

This is exactly the case with the Razer Viper Mini which is a perfectly good alternative to the Superlight. Weighing in at 61 grams and with an optical DPI of 8500, it is more than capable of taking you to the heights of league play in any modern FPS.

There are two main types of keyboard that you will come across when shopping for a new typer; mechanical and membrane.

Membrane keys are rubber-based pressure keys that are mostly cheaper than their mechanical counterparts but are more prone to input delay and breakage.

Mechanical keys are far more reliable and responsive and are what the majority of professional gamers use, however they do make a TONNE of noise! If you don’t have a good microphone that can suppress keyboard clicks then you may want to steer clear of mechanicals for now.

SteelSeries has been making high-end input hardware for PCs for a long time and have cemented itself toward the top of gamers’ wishlists. The Apex Pro TKL is arguably the best keyboard on the market right now. With adjustable switches and keys and a fantastic ergonomic layout, it’s tough to suggest a better keyboard for aspiring pro gamers.

Strip back the fancy wrist rest, the quality of RGB, and the customizable aspects of the Apex Pro and you get a basic but very capable keyboard in the Havit RGB Mechanical. At a third of the price, it’s a fantastic starter mechanical for anyone who would like to move away from membrane keyboards!

It’s no secret by now that headset and microphone combos just don’t make the cut when it comes to audio quality and streaming. Ninja sticks to this mantra and has himself the DT 990 PRO for his audio output.

As well as a fantastic stereo surround quality, the DT 990 is also an extremely comfortable headset which is good news for streamers and gamers who like to fully immerse themselves for a couple of hours.

The only downside to this headset is the sound leakage (which by design is very high). If there is anybody else in the room with you, they will hear every single action that comes through your headset. Again, not a great feature if you have a low spec mic.

Other than being a little bulky, the Mad Dog GH705 delivers in EVERY area. It has customizable bass levels and even comes with its own software, in which you can edit the audio output equalization. What’s not to love?

Microphones have recently been recognized as THE most important piece of equipment in a streamer’s setup and are probably the most impressive piece of hardware in the Ninja streaming setup. Forget webcam quality, it’s audio quality that viewers are most concerned with, and having a high quality and reliable microphone is usually top of a streamer’s Christmas wishlist.

The RE20 is a slightly older model but extremely reliable. It is used in radio, podcast, and music production as well, of course, as in the streaming industry. The RE20 XLR microphone is powered by phantom power, meaning that it needs to first be plugged into a mixer or processor before being sent to your PC.

In addition, this mic also has integrated wind and ‘s’ filters meaning less is needed on the streamer’s end to produce a nice sound. A fantastic feature that is overlooked by many when buying a new mic.

The Tracer Studio Pro is a FANTASTIC alternative to high-end mics which offers extremely similar features and results.

As a cardioid mic, it will only pick up noise created in front of the microphone which is good news for streamers in busy houses. It is an XLR microphone so it does still require a mixer or processing unit. We don’t recommend USB or ‘straight in’ microphones … unfortunately they just never seem to produce good enough quality due to limited power.

In terms of mixers or processors, take a look at the Behringer Xenyx 1002 or the Behringer UMC 22 U-Phoria for good-quality budget options.

As a streamer looking to make yourself stand out from the competition, you’ll hear a lot about the necessity of having a DSLR camera that costs thousands of dollars. In reality that’s really not necessary, as demonstrated by Ninja who settles for the ever-popular Logitech Brio.

The Brio has 4K Ultra HD video, three different FOV presets, 90 frames per second, and RightLight auto light correction which all lend to a fantastic quality of video output. Good webcams don’t come cheap, but at $199 this really is everything you would need in a streaming cam.

Having used this webcam for years, we can safely say that the C920 is perfect for 90% of streamers. Boasting a 1080p resolution and 30fps, the C920 represents a good value middle of the spectrum webcam which produces great results.

The only gripe you could have would be that it is not 60fps, but you would really only need 60fps if you were doing some serious movement on your webcam (such as running or constant jumping) which, let’s be honest, streamers don’t tend to do a whole lot of!

Most of Ninja’s money goes into his PC build; parts to which are extremely expensive. High-end, good quality input hardware however is actually relatively affordable nowadays and is especially affordable if streaming is a source of income for you.

The Ninja streaming setup reflects a new age of cost-effective hardware which also provides incredible results. Having said that, cheaper alternatives also exist with similarly impressive specifications for those who want a budget introduction to being a streamer.

There has never been a better or cheaper time to jump into the world of streaming!

See how the Ninja streaming setup compares to other popular streamers like Ludwig and Shroud.