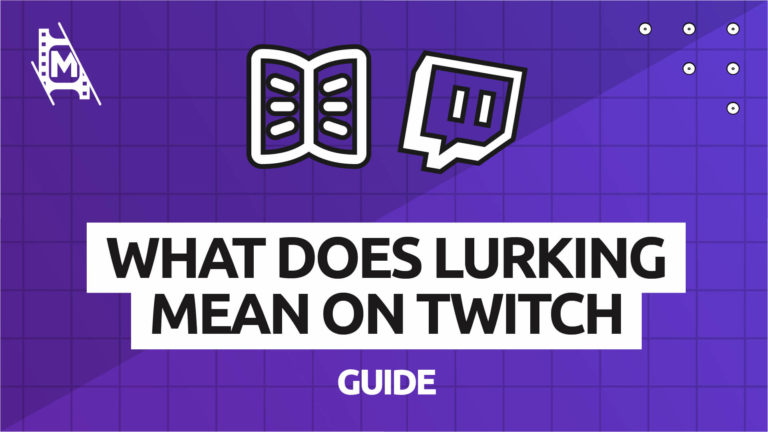 These days you don’t need to comment and use channel points to be a valuable member of your favorite stream. All you need is a computer or handheld with a stable internet connection and a willingness to listen or watch just some of the time. If this sounds like you, you might be a lurker, but what does lurking mean on Twitch?

The name makes it sound as though you are sitting under a bridge waiting for unexpecting goats to cross, but on Twitch, it has a much deeper meaning!

What does lurking mean on Twitch, and are you a lurker? You’ll find out that and much more in the article below!

What Is the Definition of Lurking?

The Oxford dictionary defines lurking as ‘waiting somewhere secretly,’ mainly because you will do something terrible. On Twitch, you can consider the first part of this definition correct. Hopefully, you’re not sitting in the shadows waiting to do bad things to streamers!

When you lurk, you tend to be actively disengaged from whatever activity is going on despite feeling the need to stick around. You want to be there but not be noticed. This is precisely where the verb ‘to lurk’ came from in the Twitchionary (Twitch Dictionary … not a term but definitely should be.)

What Is Lurking on Twitch?

Lurking on Twitch is best described as being in someone’s stream but not actively engaging with the streamer. More often than not, lurkers will watch entire streams without leaving any comments or evidence of them being there.

These passive viewers usually watch or listen to the stream at intermittent times, leaving it running in the background while doing other things.

Although lurking may sound negative, it positively impacts channels and stream analytics. Despite lurkers not interacting (which would be the ideal situation), their view time usually makes up a large proportion of a stream’s total watch time and views. For these reasons, it’s much better to have them in the stream than not.

Why Do People Lurk on Twitch?

There are many reasons viewers might feel the need to lurk rather than interact in a stream:

All of the above reasons are valid for being a lurker, and some lurkers on Twitch will never want to get involved in the chat. There are a few things that a streamer can do to encourage interactivity, however …

How to Turn Lurkers Into Chatters

The ultimate goal for the best Twitch analytics is to have all of your viewers chatting and interacting on stream. Higher interaction improves a channel’s overall performance and chances of being recommended on the Twitch home page.

Turning lurkers into chatters is tricky, but you’ll have everybody interacting in no time by following these steps.

Steps to Minimize Lurking on Twitch:

For more tips on setting up a thriving community for Twitch, check out our advice piece from Twitch industry experts right here.

Do Twitch Lurkers Hurt a Stream?

Of course, it would be better for your stream analytics if every viewer was chatting and donating. However, lurkers are not damaging to your stream’s overall performance.

Lurkers tend to have a higher view retention rate than interactive viewers due to how long they leave streams in the background.

Never discourage lurkers from being in your stream; they can be a valuable asset and boost your recommendation chances. Do, however, encourage them to say hi now and then and help them become a fully interactive member of the stream.

A Viewbot Service Has Promised to Increase My Lurker Count. Should I Use It?

There are a lot of services on the internet that offer increased viewer counts for low subscription-based fees. These programs are called viewbots, and they claim to accelerate your channel growth.

We cannot stress this enough, do not use viewbots.

Twitch has an in-built protection feature that is programmed to locate and eradicate bot accounts on its platform. Not only that but channels that are found to be using viewbots on their streams (especially Twitch partner channels) are likely to be suspended indefinitely.

Stay away from viewbot services. They help viewer analytics temporarily, but your channel will be permanently banned in the long run.

If you’re having a problem with someone else view botting your streams, refer to Twitch’s safety policy on view bots.

What Does !Lurk Mean in Chat?

If a viewer posts !lurk in chat it means they plan on lurking for an extended amount of time and might not be available to chat or interact during that time.

Some streamers program their stream bot to react to the !lurk command by posting an announcement message in chat. Set this up yourself with a stream bot such as Streamlabs Cloudbot, Nightbot, or Streamelements.

By now, you know what lurking on Twitch means. It can be frustrating seeing inflated viewer counts but a staggered chat rate as a streamer. Your initial reaction can sometimes be that you are doing something wrong. Although you can do things to encourage lurkers to interact, sometimes they just feel more comfortable being passive.

Prompt lurkers to be active in chat by being as responsive and energetic with existing chatters as possible. With the right amount of encouragement and positivity, those lurkers on Twitch who might be happy to chat will be interacting with your community in no time.

Some lurkers will never want to chat with you, but that’s okay too! Every single viewer on your stream is as valuable as the next. Remember to say hi to lurkers from time to time and let them know that you appreciate them being there regardless.