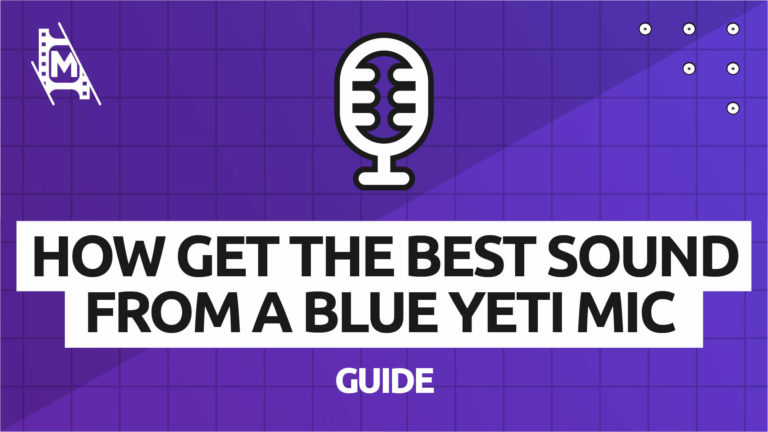 The Blue yeti USB microphone is great for recording, streaming, and whatnot, but for beginners, it can be difficult to capture good sound sometimes. Recordings might end up sounding “muddy,” and the bass sounds too deep. This problem can be fixed, and we will give you a complete tutorial on how to make your Blue yeti mic sound much better.

Why Your Blue Yeti Sounds Bad

Muddiness in the audio appears when there are many dominant frequencies that “fight” against each other (similar to how in color television, white color is made out of red, green, and blue). If the microphone records too many bass sounds (low frequencies) or treble sounds (high frequencies), it will make everything sound muddy.

Such microphones like Blue Yeti, Razer Seiren (and most USB microphones) need some kind of sound processing to make them sound better.

How to Improve the Sound of Your Blue Yeti With Software

To do this, you can use software like Voxengo SPAN or Fabfilter Pro-MB. This is the solution I
used to fix my Blue Yeti microphone’s terrible sounding recordings. However, there is a simpler
procedure that involves these steps:

1. Play an audio file with Blue Yeti while recording on your computer (This is necessary because
it activates the microphone gain).

2. You will see a small bar graph on your taskbar, which represents the sound you are currently
playing and how it sounds through the Blue yeti mic. Remember, this step is important to make
sure your mic is activated before the next steps.

3. Make sure the “monitor” toggle on your Blue yeti microphone (the one that’s beside the gain and
mute toggles) is switched off (gray/white).

4. Open up a sound mixing software like Audacity or Adobe Audition and play the recording
again. This time, you will see the “audio” bar graph that represents how you hear your
computer’s sound.

5. Usually, these two graphs will be out of sync (they do NOT overlap), and you can correct this
by putting the “audio” bar on top of the “mic” bar (the mic’s is usually more delayed than the
audio, just try to adjust it so that they overlap).

6. Now, you will see both the “mic” and “audio” bar graphs on top of each other. If their levels
are comparable (they can overlap completely), then your microphone is set up perfectly! You’ll
notice that there aren’t too many dominant bass or treble sounds, so you’ll get natural-
sounding recordings.

Some sound mixing software can automatically do this for you, but this is an easy way to do it
manually, even if you are using free software like Audacity or Wavosaur.

Now that the mic gain has been activated and calibrated correctly, your Blue Yeti microphone
should record great quality audio.

Use One Microphone per Person

If you have to use several microphones for a single person, place them in the same position so
that their audio phases are in sync. This can be done with audio editing software like Adobe
Audition or Audacity.

Have each microphone in its own layer in your DAW so that you can adjust their volume levels
independently. This is not necessary to make a good audio recording, but it does make mixing
easier.

Remember to keep each microphone at a safe distance from its owner (keep the yeti at least
50cm away from your mouth). If you can’t avoid placing a microphone very close to the
speaker, put it inside a small cardboard box and talk to that instead. This reduces the bass
sounds that the microphone picks up.

Tell everyone to keep their mouths closed and avoid saying plosives (like “p” or “b”) directly
towards the mic.

Get Closer to the Microphone

Although it’s a good idea to get closer, try to avoid touching it when speaking.
Buy a microphone arm that holds the microphone steady in front of your mouth (do NOT buy a
boom arm).
If possible, get everyone to wear headphones while they are talking. This reduces the amount
of background noise that gets picked up by the mic.

Make sure that the room you are recording in is not too noisy or too reverberant. If it has a carpet, then that’s usually enough to reduce echo. However, if the room causes many problems with reverb and noise, I recommend you buy soundproofing tools such as foam pads (they look like egg boxes).

Buy some expensive pop filters that reduce plosives and sibilance.
Use a noise gate to cut off background noises that occur between speaking, but don’t use ones
for reducing dynamic range as they might affect the tone of your voice too much.

Do NOT buy an expensive sound card or mixing interface if you are recording from the
computer. They often worsen the sound quality instead of improving it.

Use the built-in sound card of your computer. If you have a good mic, then they might be
enough to record decent audio with no extra equipment at all. However, if you want the best
possible results, then consider getting an external USB sound card or mixing interface.

Do NOT buy noise reduction software unless you have a noise problem so bad that it can’t be
fixed any other way.

Buy a software equalizer if you feel there is too much bass or treble in your recording, but it’s
better to get one when you already know what you are doing. This will only make things worse
unless you have good knowledge of sound engineering. If you are using an audio program to record your voice, then lower its sample rate for better
quality.

However, do NOT ever use anything below 16-bit if you can avoid it because this makes the files
twice as big for no improvement in sound quality.

Use a compressor or limiter to fight against loud peaks that might cause clipping.
If you are using an audio program to record your voice, then use it to change the pitch of your
voice afterward. This makes everyone sound more interesting than having a monotonous tone.
This can also be done with Audacity if you want to do it manually.

Avoid direct contact between the Blue Yeti mic and Your Desktop

Direct contact with the mic makes the sound quality worse. Therefore it is a good idea to get a pop filter to stop plosives from being recorded as loud ‘pops’ sounds.

You can also use a noise gate to cut off background noises that occur between speaking, but don’t use ones
for reducing dynamic range as they might affect the tone of your voice too much.

Using the 4 Modes of the Blue Yeti Microphone

There are four modes on the Blue Yeti microphone: stereo, cardioid, omnidirectional and
bidirectional.

The first three modes (stereo, cardioid, and omnidirectional) are most useful for podcasting or
voiceovers where you want to focus on a single sound source. The last mode (bidirectional) is
mostly used for interview recordings with two people speaking at once.

Tip: To get a bassier sound with the Blue Yeti, avoid cardioid mode and always use
omnidirectional mode. This is because cardioid mode reduces the bass sounds that the
microphone picks up.

The Blue Yeti microphone features an ‘enhancement’ mode that is supposed to make the sound
quality better. If you are using a PC, then turn this on, but if you’re using a Mac, then turn it off
as this often makes things worse than better. It’s also highly recommended to use acoustic echo
cancellation (AEC).

Is the Blue Yeti Worth it?

The Blue Yeti is the most popular and probably the best cheap microphone on the market for
gamers and YouTubers because it gives decent audio quality at relatively low prices. It has good
sound quality and good noise insulation but only 3 recording patterns (it’s like having a car with
great suspension, but only 2 seats or 3 doors). It has a headphone output to record in total
silence, which makes it good for recording without being noticed. The Blue Yeti also works well
with most operating systems and devices, so you won’t have any compatibility issues when
using it.

To fully answer this question, we are going to quote this comment on Blue Yeti microphone’s
Amazon page.

“I have one of these mics… it is not bad quality, at least for me. The problem is that people are
expecting more from a $100 dollar mic than they should. This mic would sound great if you’re
playing video games on your pc or recording some vocals. But if you are doing some sort of
professional work, you’d obviously need a better mic… I’ve used this one for all sorts of sound
effects in radio plays and short films I made with my friends.”

We hope this tutorial helps clear up the problem people have with Blue Yeti microphone and improve the audio when recording.