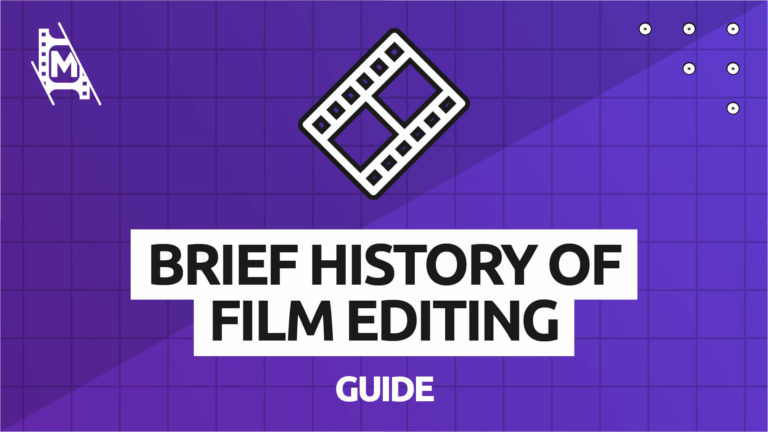 “The film is made in the editing room,” said later Philip Seymour Hoffman about the importance of montage. Arguably, editing is the most vital part of post-production in film.

Editing refers to the process of cutting and assembling segments of shot footage to create a cohesive narrative.

Today anyone can access editing tools by downloading an app on their smartphone or computer. But how did we get to this stage of technological accessibility? To answer this question, it is essential to go back to the very start and analyze the step-by-step process of how editing came to be.

While we are not going to cover the history of film editing in its entirety, this article will highlight major milestones that influenced the development of the film industry as a whole.

To understand how the art of montage and film editing was established, we need to dig deeper into the history of filmmaking itself.

The first moving image device that came to be known to us is known as kinetograph and was invented in 1890. If we elaborate an etymology of the word from Greek, kineto means movement, and the graph is derived from the verb to write. Therefore, the device tends to express its ability to capture motion, or in simplistic terms, to write movement. Kinetogrpah was utilized to project frames at a high rate, and through the effect of flickering, it created an illusion of movement. The device was initially used by Thomas Edison and William Dickson.

Later, kinetograph became a foundation to create the first film camera, known as a cinematograph. Invented by Lumiere Brothers (the first filmmaker in history), the cinematograph was a light device created to capture still images in good quality. The frames of the footage were later on developed and assembled on kinetograph.

At this early stage of film history, editing consisted of mostly cutting the film rolls. The filmmaker was placed in front of the kinetograph, and the images were cut and rearranged on their scope. This type of editing was known as “cutting and sticking” and was the first type of editing that started being widely used in the film industry.

The early success of the short films resulted in a demand for more. Filmmakers started coming up with more complex set-ups for movies and incorporating more advanced narrative elements.

The Great Train Robbery (1903) was a short 10-minute film created and edited by Edwin. S Porter. The film was somewhat experimental, as it presented elements of detailed narration and, as a result, adopted a more progressive form of editing.

The Great Train Robbery revolves around a group of bandits that decide to hijack a train to steal the money on board. Edwin Porter used many editing techniques that no editor within the 1900s had ever seen before. One method that he used was cutting and also parallel editing within scenes.

The Great Train Robbery contained 14 scenes, using cuts and crosscuts and other sophisticated editing techniques using a machine known as a splicing machine.

The montage was formed from different shots that, through editing, were tied together by cause-and-effect. When we watch a film now, it is common sense that the sequencing of shots is constituted through a semantic connection; however, back in 1903, it was a true invention.

This movie laid a foundation for storytelling in film. Theatrically, The Great Train Robbery has become a financial success, so the studios decided to direct their attention to making more narrative-based films.

The invention of the splicing machine, narrative structure, and a completely new approach to editing laid the foundation for storytelling in film.

For the next twenty years, filmmakers started experimenting with writing more complex and longer stories, inventing various genres and trying new on-set technologies. But what really became the next milestone in film editing is a concept known as Kuleshov Effect.

Kuleshov Effect is a film editing effect demonstrated by Russian filmmaker Lev Kuleshov in the early 20th century. Kuleshov was fascinated with the power of film editing and how it could manipulate the emotional being of the audience.

The effect is a mental phenomenon by which viewers derive more meaning from the interaction of two sequential shots than from a single shot in isolation. To put it in simple terms, it is the sequencing of two shots that adds semantic meaning to the scene itself.

Imagine a shot of an older man smiling. Subconsciously, you are going to ask yourself a question: what is he smiling at? The next shot will establish exactly what the older man is smiling at. The content of this upcoming shot will elicit a particular emotional response in the viewer. If we include a cute puppy shot afterward, it is implied that the old man is kind and benevolent. However, if the filmmaker decides to follow the shot of an older man with a shot of a naked woman, the implication is somewhat different; the viewer now perceives the old man as a pervert. The Kuleshov effect establishes the emotional casualty (cause and effect between two shots). The comprehension of this effect has allowed filmmakers to experiment with new narrative techniques by eliciting the audience’s emotions. This type of editing tied the basics of human psychology into the process of film editing.

Therefore, it is a deliberate sequencing of the shots that can strongly affect the viewer and manipulate time, space, emotions, and narrative structures. This effect influenced filmmakers for generations to come, as they have understood it could manipulate the viewers emotionally.

The filmmaking game had once again changed in 1927.

Not long after color was introduced to films in the mid-1920s, the synchronized sound was invented. The Jazz Singer (1927) has marked the ascendancy of talkies and has become the first film with fully synchronized dialogue. This was a true breakthrough that has resulted in a significant cultural shift in the film industry and laid the foundations for the intricacies of sound design.

The Jazz Singer tells the story of a young man who must defy the religious traditions of his religious father to pursue his dream of becoming a jazz singer. While the film recently has been widely criticized for its portrayal of African Americans, it remains an essential piece of film from the historical perspective.

Before The Jazz Singer, there have been multiple attempts to experiment with sound in film. In the earlier days of film, when the movies were projected in cinemas, an orchestra accompanied the film.

As the technologies of montage became more advanced, it became possible to synchronize recorded sound with moving images in post-production.

Having said that, it is important to underline that film editors have experimented with adding music and sound effects before synchronized sound was invented in 1927. Earlier montages have included elements of synchronized sound in certain parts of the film. However, it was not until 1927’s The Jazz Singer that an entire feature film was released with synchronized sound.

After the invention of synchronized sound, the advancements in film editing slowed down for the next couple of decades. However, in the second half of the 20th century, film editing started evolving exponentially with more and more technological advancements taking place.

Ampex VTR became available in 1956 and was the first videotape recorder open to the public. First and foremost, this invention has served as a replacement for motion picture film stock and has made the recording of footage cheaper, safer, and easier. Ampex VTR recorded and played back audio and video material on magnetic tapes and could be reproduced on an infinite scale.

The invention of this system has made the editor’s life much easier since now they could back up their work and experiment with the editing. Consequently, this resulted in groundbreaking new techniques in editing and new artistic movements. Many arthouse filmmakers and experimental film movements such as the French New Wave used this technology to play around with the edit and later distribute their films on a larger scale.

Ampex VTR laid a foundation for the new system, particularly for editors known as CMX System.

Another significant milestone in the history of the film editing revolution was achieved at the beginning of the 1970s. The invention of CMX systems was a huge boost within the editing industry, as it has given editors freedom, security, and potential with their edits. The central benefit of these systems was the potential for non-linear editing.

Non-linear video editing systems meant that filmmakers could locate a frame within seconds and go back to their edit to change something. This invention allowed filmmakers more area for errors and flexibility, as it did not modify the originally recorded footage. The CMX 600 was the very first model that offered a non-linear editing video system.

The accumulation of all the technological advancements and progress in computer science has resulted in the most recent invention for video editors: Avid Technology.

In 1987, Avid Technology created Avid (1 Media composer) and had indeed a revolutionary design that has dominated non-linear editing systems ever since. The system’s interface was initially developed for Macintosh (later on adopted for Windows as well) and has won the hearts of many editors for the combination of editing tools and its non-linear approach. The interface was relatively user-friendly yet powerful, and thus from early on, it has been used as an industry-standard editing software for the past 30 years.

The success of Adobe Premiere was followed by the release of other video editing software, such as Final Cut Pro, iMovie, DaVinci Resolve, and many more. Today, film editing has become available to almost everyone, yet it remains an intricate art of assembling moving images and sound in deliberate sequences for many.

Now, hundreds of software available on our smartphones allow people to edit whatever they want. Whether it is a TikTok reel or an anniversary video, everyone can be an editor with absolutely minimal effort. Editing has become an integral part of our lives and has beautifully evolved since it was first invented in the late 19th century.

So what does the future bring in the history of film editing?

The majority of these montage-related advancements have taken place in the past 100 years. Now try to imagine and ask yourself: how will the film editing approach evolve for the next century to come?

Regardless of what technologies will be invented, the need for storytelling will remain for centuries to come. As long as people are hungry for new content, the artistry of film editors will stay relevant and valued.