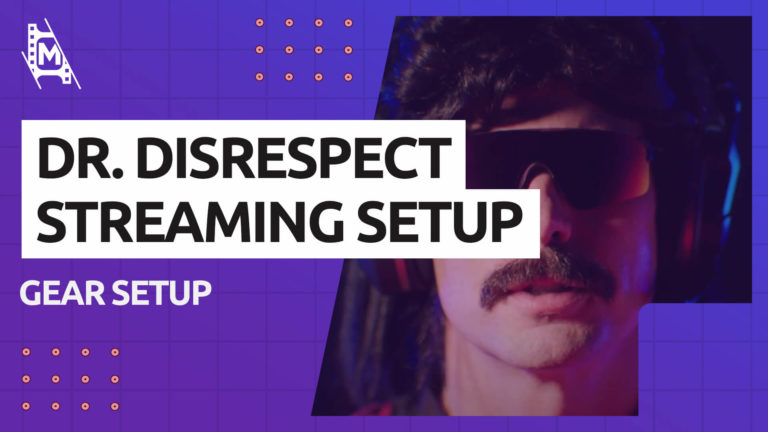 You would be hard stretched to find a larger gaming streamer than Dr Disrespect. With his original combination of high-end gaming and cocky alter ego he has built himself an incredibly successful profile.

To mirror the technical specs of the Doctor, you’re going to need thousands of dollars. Wrong! The Dr Disrespect setup is actually relatively cost-effective and can be put together for a reasonable price.

We’re breaking down the most important aspect of the Doctor’s setup and also some cheaper alternatives for those looking to build a setup on a budget.

Who is Dr Disrespect?

Dr Disrespect is a highly successful gaming streamer. Herschel Beam (the Doctor’s real name) began his streaming career in 2015 after quitting his job working for a large game developer as a level designer.

He streams under the moniker Dr Disrespect and has upheld this in every stream ever since its inception. Although he regularly breaks character to address serious issues, you will usually find him acting as a huge extrovert, being cocky, proud, and boastful.

The Doctor was banned from Twitch in 2020 for undisclosed reasons and made the switch to YouTube soon after, where he continues his streaming success to this day, regularly streaming to over 10,000 concurrent viewers at a time!

A 240hz refresh rate means that you can run an FPS value of up to 240FPS … which makes for an insane quality of smoothness in your graphics. Most gamers play at around 60-120fps, so having the capability to bump that up to 240 is huge!

The features that probably catch your eye first are the shields on the side and the top of the monitor. These shields are designed to block out harsh backlights and increase your focus on the monitor content. They work surprisingly well and could well be a standard feature on monitors in the near future.

Looking to save on your monitor but still get a solid 1080p resolution? The MSI Optix comes in much cheaper than the BenQ due to its maximum refresh rate of 75hz but still has decent color depth, image resolution, and brightness capability.

With 75hz, you’ll still be able to game at 60fps, which is an extremely acceptable rate for most games and systems. In fact, if you’re streaming, most platforms only accept video output at 60fps anyway!

At this point in a setup breakdown, we’d generally name a large brand competitor as the streamers chosen mouse… probably from Razer, Steelseries, or Logitech. However, Dr Disrespect has pitched for a relatively unheard-of brand for his pointer needs.

Despite its unknown status, the ROCCAT Kain 200 AIMO has great specifications; 16,000DPI, wireless transmission, and a very efficient rechargeable battery.

As wireless mice go, its responsiveness is top-notch and can definitely compete with other more well-known gaming mice.

DeathAdder by Razer is a great budget option for an optical mouse.  Razer is known for its reliable hardware, and this mouse with 20,000DPI might not feel too weighty in hand but certainly performs in terms of accuracy and performance.

Continuing on the ROCCAT theme, Dr Disrespect plays using the Vulcan 112 AIM keyboard. As layouts go, it looks like a cheaper keyboard but performs like a AAA. Show this to any professional gamer, and they would likely dismiss you straight away! The non-removable plastic wrist rest and circular multimedia knob are usually surefire signs of shortcuts being taken in manufacturing but incredibly, the Doctor loves it!

Despite its appearance, the Vulcan 122 AIM has mechanical switches, advanced anti-ghosting, and long-lasting durability making it a viable option in your choice of high-end keyboards.

Simple, sleek, and super! The KM360 does away with the numpad keys to make it a much smaller and space-efficient keyboard. It has semi-mechanical switches giving it decent responsiveness, and it has to be said… looks minimalistic yet fantastic! It also comes with a detachable USB-C cable which has both its advantages and disadvantages; lose it, and you can’t use your keyboard!

Jump in your time machine and set the year to 2006. Everybody is playing online on their Xbox 360 or PS3 and talking to their friends via party chat. The chances are if you or your friends have a bit of money, they’re wearing a state-of-the-art Turtle Beach headset which is the talk of your friendship circle.

Turtle Beach sure has been around for a long time and no longer dominates the market, but they still know how to produce a great-sounding and comfortable set. The Atlas Aero features 7.1 surround sound, a comfortable adjustable head strap, and fantastic sound-proofing ear pads.

These headphones aren’t for everybody, but if they fall within your budget, they would be a brilliant addition to your setup.

Tested, proven, and solid. These are three of the adjectives you’re most likely to see when reading about the Razer Kraken X headset online. Nobody is expecting miracles at around the $40 price point, but the Kraken X delivers in most departments.

Its sound quality is clear, and the stereo sound has good location clarity. The only area it lacks slightly is comfort—still, a very worthwhile investment for a budget setup.

As with most markets, a top product comes with a top price tag, so the SM7B is certainly not for everyone. Alongside the microphone, you’ll also need to purchase a long list of items, including multiple XLR cables, a processor, a mixer, and a swivel stand. Before you know it, you’re up around the $1000 mark for all of your vocal recording equipment.

If cost isn’t an issue, always plump for the Shure SM7B.

A fan favorite of everyone here at MediaEquipt, the Tracer Studio Mic Pro is a stunning all-in-one package. For the price of a date at the cinema for two, you can grab yourself a cardioid microphone, swivel stand, XLR cable, and pop shield.

The quality of the microphone is as good as any when run through a mixer or processor and the clamp stand that comes with it is sturdy and true.

When the Brio was released in 2017, it promised to bridge the gap between DSLR cameras and webcams. With 4k resolution and 90FPS capabilities, it is absolutely the most impressive webcam on the market to date. It has fixed many known issues with past Logitech webcams, including poor autofocus and adjustable field of view, putting it miles ahead of its predecessor.

The issue here is the price. Twohudered bucks is a lot of money for a webcam, and in reality, you could probably pick up a second-hand DSLR for that price which you could also take out for your photography needs.

Logitech has long been producing reliable webcams of all different resolutions and price points. The C270 is a ‘starter pack’ webcam for streamers but doesn’t really provide good enough resolution.

Enter the C920. A cost-effective, high-resolution camera capable of capture at 1080p and 60fps. It’s not quite as crisp and clear as the Logitech Brio, and its autofocus is pretty poor. Still, it’s a great budget alternative that is very capable of producing satisfactory results.

While it obviously doesn’t have the technical specification of the Brio, the C920 is more than capable of producing excellent video quality for streamers who need a clear and crisp corner webcam for their content. The resolution is also high enough to produce aesthetically pleasing chroma keyed footage without color bleeding.

As with most large streamers nowadays, the biggest portion of Dr Disrespect’s funds is spent on audio equipment. Recent research has discovered that viewers value audio quality slightly higher than video quality, so having a microphone that can capture that sound perfectly is a high priority. When budgeting for a new setup, decent monitors and keyboards can be bought relatively cheaply, but audio equipment is where most of the value lies!

Are you still intrigued as to what equipment other large streamers use? Check out our Pokimane and Shroud setup guides for more streaming insight!