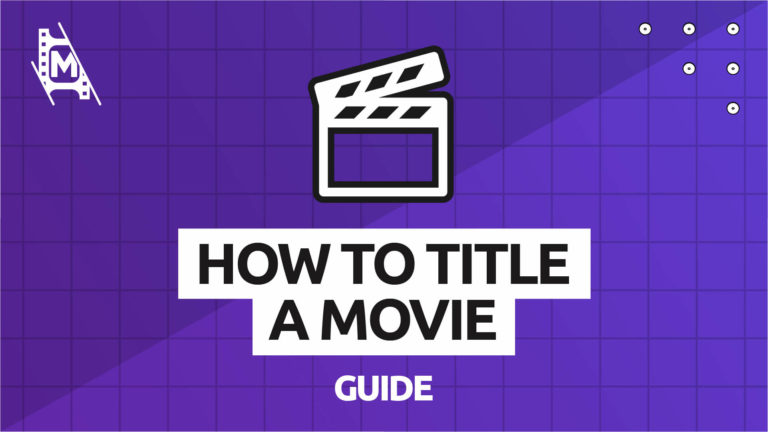 Not only can a film’s title encapsulate all its ideas, but it can also help with marketing. A film’s title can entice, inform and engage the public before they’ve even watched the movie. I think most people understood what Jaws was about when they first saw the poster and title.

We beg to differ.

If your film is a blockbuster, then you’d be better placed devising a title that is easy to understand and say. But in the arthouse world, some of the best titles symbolize an atmosphere only fully realized upon watching. In any case, there are generally three ways to come up with a movie title. Those are:

3 Ways To Title Your Movie

If you’re struggling to come up with a name for your film, maybe you’re overthinking it. Some of the best film titles are comprised of only one syllable, let alone one word.

The key is a theme. Not a story and not the plot. And not the narrative when it comes down to minimalist movie titles.

The viewer should finish watching your film and be able to say, “aah, it makes sense.”

Here are some examples of films that nail the theme perfectly without telling you exactly what it is within its title:

There are many more, but the best titles all invite the audience to the door of the world. You have to watch the film to enter it. For example, let’s say your movie was about time travel. Your film’s characters enter a time war where both armies possess the ability to alter time.

You could call the film “Time War.” Well, that’s boring.

Or you could call it Tenet. A tenet is defined as “a principle or belief, especially one of the main principles of a religion or philosophy.”

The word tenet is also a palindrome that typifies the reversed nature of the film’s storytelling.

Christopher Nolan is one of the best at this. He is the master of short and sweet titles that illustrate the film’s atmosphere.

My favorite is The Dark Knight. Just think about what that title communicates—every Batman film before it had “Batman” in the title. But Nolan created a different caped crusader, so what better to show that by not even including Batman in the title.

Naming your film after a character is another excellent way of introducing the audience to your world. It works better for more character-orientated movies as the title implies that the narrative is centered around characters rather than the location, plot, or anything else.

You can do this by simply entitling the film after the main character(s).

Some good examples of this are:

–     Pirates of the Caribbean: The Curse of the Black Pearl

Can you see the trend here?

This kind of titling works best for films that want to present the character as the focal point. So it’s usually superheroes or other action heroes. These films offer iconic characters that are just as important as the stories themselves.

This method can also work for dramas and comedies.

Here are a few:

The key is focusing the film on the character. If the film doesn’t, viewers may feel cheated.

Now, this isn’t easy to pull off.

An ambiguous film title is a title that doesn’t appear to indicate what the film is about directly. It’s best used for arthouse films that want to present an enigmatic atmosphere for the film.

Some of the best include:

–     The Eternal Sunshine of the Spotless Mind

This one isn’t overly ambiguous. You could probably tell that the film delves into the psyche of a character’s mind.

The title refers to men who tried to kill goats by staring at them and subsequently stopping their hearts. The film is about a military unit that employs paranormal powers in its missions.

Combining the title and the premise, one could assume that the film has comedic undertones.

A psychological horror-thriller. The exact opposite of a “funny game.”

This makes sense upon watching. The use of “country” and “men” implies a “Western” theme which is apparent throughout.

The title is never even mentioned in the film. However, it perfectly sets up the surreal atmosphere.

A lot of these titles make sense, having watched the entire film. However, filmmakers typically do them to create an air of mystique or even confusion (moreso used for comedy).

Viewers can ask the question: What does the title mean? At the start and have it answered by the end.

While titling your film is important as it’s the very first thing people are introduced to, it’s not everything.

Ultimately, you don’t want to turn your target audience away upon reading the title. A blockbuster needs an easy and iconic title. Independent arthouse film audiences want more of a challenge when it comes to titles.

How you title your movie depends on the subject matter and who it was made for. If you want to learn more about that, we recommend this article.