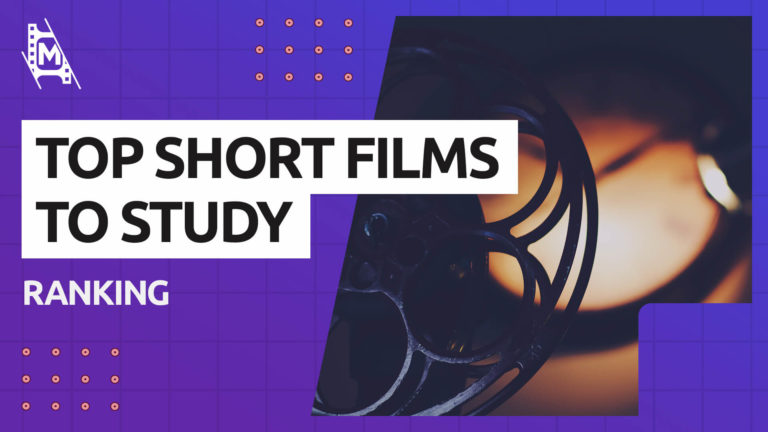 Short films are an interesting phenomenon.

While most are an intro to filmmaking for many students and budding directors. Shorts are some of the most innovative works of art existing within film. Of course, thanks to filmmakers like the Lumiere’s brothers and George Melies, cinema was born from shorts.

Short films are essentially cinema in its purest form.

In this article, we list 6 of the best short films to study for filmmaking inspiration.

The Best Short Films to Study

Paperman is a classic love story. A man searching for the love of an elusive woman.

We’ve seen it all before.

Its genius lies in its craft and economic storytelling. With a runtime of 6 minutes, there is not a single frame wasted. This is quite common with animation where each second can cost thousands of dollars.

The story starts with a lowly office worker bumping into an attractive woman on a train. The rest of the narrative focuses on the man’s inability to focus on his work. Thanks to a woman he saw for all of five seconds.

Bizarrely he spots her in the office window opposite.

Now, if you were trying to get the attention of someone in the adjacent high-rise building, what would you do?

Well, he decides to make a paper airplane. His aim is for the plane to reach her and thus get her attention.

OK, the story lacks depth but some of the best short films don’t require it. That’s exactly why the film is a good case study.

It’s a complete masterclass in animation, story beats, and editing. Yet, without the magical realism component, the award-winning short film loses impact. Disney produced the film and with a crew of over 100 people, it’s not an indie production by any means.

As a production, filmmakers can’t look to Paperman for inspiration.

The main takeaway of the film is that every single shot counts. While important for most films, it’s especially important in a short. You don’t need to make your story complex but you need a hook.

Paperman’s hook was the idea of the man using paper planes to attract the lady’s attention.

John Maclean’s 2012 award-winning short film is another example of the kind of economic storytelling that reigns supreme.

Starring Michael Fassbender and Liam Cunnigham, it details the story of two thieves attempting to rob an office of digital information.

The premise is simple.

The caveat is that they must complete the heist in pitch-black darkness. Simple story. Intriguing Hook. Starting to notice a trend here?

Pitch Black Heist features no complexities. But the darkness element offers the narrative a unique perspective on the heist genre. This is the key that filmmakers wanting to succeed at making the best short films should think about.

But there needs to be a unique angle. It should offer something other films don’t. Thus completing a heist without being able to see is a great example of this.

There is a 2-minute segment towards the end where Maclean plunges the audience into darkness. The viewer can only guess what’s happening through dialogue and sound design. This heightens the anticipation of a mishap as we delve further into uncertainty.

In essence, we become the characters as we navigate the surroundings with the same visual impairments they have.

Takeaway: Invite your audience into the minds of the characters.

In 2016, The Young Vic theatre in London released a number of short films starring household names.

The Roof is a brief comedic tale about a pending visit from a theatre legend.

Due to the Young Vic’s status within the UK’s theatre scene, they were able to garner names such as Sir Ian McKellen, Jude Law, and Natalie Dormer.

At the start of the film we are introduced to the mystique of a “Peter Brook” – a legendary figure within the theatre world.

When a bandaged man walks in it’s assumed that this is Peter. Towards the end, it’s revealed that the same man is in fact not Peter Brook but a structural engineer from the Peter Brooks firm in Croydon.

The set-up = the visit of a star

The comedy arises from the sea of fans that were following a Croydon-based engineer and not a legendary theatre director. As a punchline short film, it leaves the audience with a question.

Who do we follow and why? In the minds of the fans, it didn’t matter whether they actually knew it was Peter Brook or not. It was enough that people thought it was him.

The Roof succeeds as a short that brings to light a philosophical question under the guise of comedy.

If you wanted to do the same…think of a clear punchline with an underlying question that challenges a common societal thought.

Takeaway: Make sure the pay-off is worth the set-up.

4. The Irrational Fear of Nothing

A paranoid man roaming the streets of New York City. Anxious about the world he inhabits.

That’s pretty much it.

The Irrational Fear of Nothing doesn’t really have a story. One character. No inciting incident. No plot.

It’s a film that shouldn’t work…but does.

Why? Because it presents anxiety (something many people experience) from a novel perspective. Director Paul Trillo and his team used a SnorriCam throughout all the sequences. The SnorriCam is a camera rig that is typically fastened to an actor’s body. It allows the camera to always follow the movement of the actor which creates a disorientating effect.

You have probably seen the camera angle in many music videos, commercials, and films. It’s become overused but when done right it can create a great synergy between form and story.

That’s why The Irrational Fear of Nothing works.

The film is about a claustrophobic man in the large expansive world of NYC. The SnorriCam exacerbates the alienation through camerawork that keeps the audience close.

The interplay between camerawork and story enhances the best short films by amplifying both form and content. The best short films make the most out of the medium. In a sense, they wouldn’t work as longer versions. For example, the SnorriCam effect would not work for a full-length feature as it may seem a tad gimmicky.

Combine Last Year at Marienbad with a dash of Eyes Wide Shut and a Paris Fashion Week runway show and you’d come close to describing the atmosphere in this branded content short film.

It’s not exactly a typical short film as it is an advertisement.

Again, there is no real story. Director Ryan Hope blasts us to another realm through his one-take journey into an eclectic stately mansion dripping full of fashionistas and suave men.

As a short film with no narrative, what makes the film alluring is the atmosphere. Hope was able to create this through stellar production design, a jaw-dropping location, and camerawork.

Its masterful worldbuilding entices the viewer with questions.

Why are the models drifting in and out of the set? Who is the old lady and what role does she play?

In fact, why are they all there in the first place?

Asking the viewer questions without answering them sparks intrigue. Intrigue is what keeps viewers glued to their seats in anticipation of the questions being answered.

But don’t answer them! Let the audience make their own conclusions.

One-take-short films are hard to pull off. With the advent of newer camera technologies, letting the camera roam for minutes on end is the easy part. The hard part is filling the mise-en-scene with interesting enough sets/characters to justify it.

To attempt a one-take film, you would want to make sure that every single part of your set tells a story or at least implies one. You can’t get away with dead zones in a one-take-short film.

Takeaway: Keep the audience guessing at all times. Never give them closure.

You’re probably aware of the feature film but did you know it was originally a short? Damien Chazelle’s oscar-winning feature started as a proof of concept short which attracted the interest of financiers.

The proof-of-concept short is a common tactic utilized by filmmakers to see if their stories have the legs to be made into features.

Whiplash was no different.

It’s a story about a newcomer trying to keep up in a drumming class.

On the surface, that’s it.

But what lies underneath is what sets the story apart.

Chazelle needed to find out whether his militant portrayal of a drum class would work. J.K Simmons appears more like an army general than the usual music teacher. The best short films work as premise tests for features because you’re forced to pine for brevity.

In the short film version, Chazelle took one scene out of the feature and based the entire short around it. The main difference between the short and feature is that there’s no Miles Teller.

While Johnny Simmons does an admirable job, the role is Tellers. He truly made it his own in the feature.

That’s beside the point anyhow.

A proof of concept short is there to test the waters and Whiplash achieves that through its unique portrayal of a musical pastime. It achieves it through the lens of competition and physical endurance.

The short also succeeds in further portraying a more militant atmosphere through J.K Simmon’s performance. Earlier I mentioned how the best short films marry camerawork with the story to enhance the atmosphere. Well, the same applies to character actors.

Simmons’ role works perfectly for the short as he’s known for playing angry and domineering roles.

When making your short film think of the actor’s relationship with the subject matter. How believable are they as characters in the specific role? Could you imagine the role being played by anyone else?

Some of the best short films win based solely on unforgettable characters and actor performances.

Takeaway: Cast actors that are perfect for the role and the rest will fall into place.

Shorts provide a great opportunity to learn the craft and set themselves on their way to success in the industry. My first short film UNUS was a stepping stone for me into features and I recommend all budding filmmakers to do the same.

Look at some of the takeaways listed here and see how you can incorporate them into your stories. Each passing year it becomes easier to make films. Money is no longer an excuse.