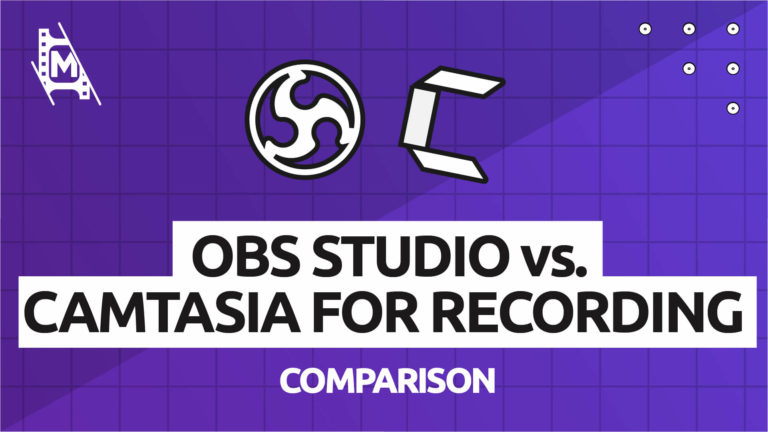 Whether you make explainer videos or computer tutorials, you will have to rely on good screen recording software.

OBS Studio is both a streaming and recording software that is entirely free and open source. On the other hand, you have Camtasia, a more specialized screen recorder for making explainer videos.

This article will cover the difference between OBS Studio vs Camtasia and what you need to consider with each option.

The Biggest Difference Between OBS Studio vs Camtasia

If you want to make a quick decision on which software to go with, consider this; While OBS Studio is one of the best screen recording software and is entirely free, you need an external video editor to edit your videos.

This means you need to combine OBS with a editing software like iMovie (free but limited in what it can do) or Premiere Pro (paid).

While Camtasia comes with a pretty hefty one-time fee, you do get both a screen recorder and a video editor in one. It is also very user-friendly for first-timers.

The decision will ultimately come down to your preference and what software you are already using.

For example, if you happen to be already using a video editor like Premiere Pro, it would probably make more sense to get OBS Studio and edit your videos in Premiere.

Secondly, OBS Studio offers live-streaming capabilities Camtasia lacks entirely. So if you are thinking of streaming explainer videos and such, OBS is again the best option for you.

Here is the breakdown in bullet points:

Below is a more in-depth comparison of each aspect of the two software.

OBS Studio – As we mentioned above, OBS Studio is an entirely free, open-source streaming and recording software that has been around for quite a long time. OBS has a massive community of users that provide tutorials online and 3-rd party plugins to extend its features. It is widely used by gamers, professionals, and online educators.

Camtasia – TechSmith Camtasia has also been around for a very long time since its initial release in 2002. It has grown to become a widely popular screen recording tool. Camtasia consists of 2 parts; “Camtasia Recorder” for screen capture and “Camtasia Studio” for post-production.

As stated earlier, OBS Studio is entirely free. Also, most 3-rd party plugins for OBS are free too, which means you have many options to extend the functionality.

Camtasia, though requires a one-time payment. This is refreshing in a world where everything seems to be subscription-based with recurring payments.

Their pricing model is divided into individuals, businesses, education, and non-profit. For individuals, each license costs $249.99 at the moment. For more pricing information, check out their product page.

Next, let’s cover the feature you are probably here for; screen capture.

Both OBS and Camtasia allow you to record your computer screen. This is great for tutorials, explainer videos, etc.

Camtasia allows you to record your entire desktop or a custom capture area of your screen. You can set the exact height and width of the area you want to screen capture, and there are handles you can drag to get the exact position in as well.

OBS Studio offers primarily two screen recording settings; “Display Capture,” which records your full screen, and “Window Capture,” which only records a selected window. OBS does not offer the custom capture area sizing as Camtasia, which can be somewhat limiting.

On the other hand, Camtasias custom capture area can be annoying when you accidentally close a window and it continues to record the desktop. And if you expand the window size, you have to manually adjust the screen capture area again.

As stated above, OBS Studio does not offer any post-production tools as it is strictly a video-recording and streaming software.

Even though Camtasia offers a video editor called Camtasia Studio, it is nowhere near the scope of stand-alone post-production software.

So in terms of post-production, what does Camtasia Studio offer?

You do get a library of features like annotations with text, transitions, and voice narration. We found these features to be quick and easy to use. Great for people who don’t have a lot of experience with video editors before.

Additionally, Camtasia also offers features like cursor effects. These are kinda old school now, but might be useful for some.

In terms of the timeline, don’t expect anything super fancy. It is also very beginner-friendly and kinda bare-bones. But for video lessons and tutorials, it is all you need.

As live video only becomes more popular, the ability to live stream is getting more critical than ever.

Camtasia does not offer any live-streaming tools, though. So OBS, which is primarily a live streaming software, is the apparent winner in this regard.

Where OBS exceeds, in our opinion, is its use of “Scenes.” Scenes are a configuration of sources you can switch between. For example, “Scene 1” can be a full-screen of your webcam, while “Scene 2” can show your desktop with a webcam window at the corner. And the best part is that OBS allows you to change between scenes with just a click of your button. This is ideal for live tutorials, webinars, and such.

You can, of course, built the same types of configurations in Camtasia, but only after you have recorded each source separately. Meaning it’s not made for live video the same way as OBS is.

Camtasia’s primary advantage is the post-production features laking in OBS Studio. But having said that, these tools are nowhere near a fully-fledged video editor like Premiere.

Which one you choose over the other, will ultimately come down to preference. But you can do wonders with OBS and a paid or free video editor with some technical skills. If you want to learn more about OBS Studio and how to use it to your full advantage, check out this tutorial article.