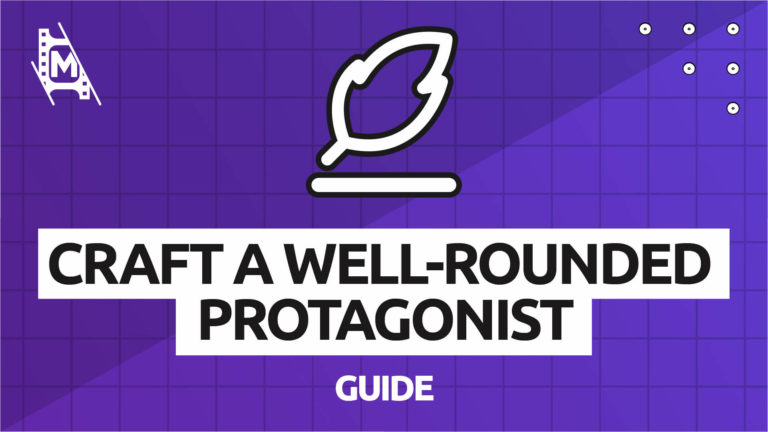 Arguably, the most crucial aspect when you write a protagonist is a multifaceted hero. Loads of stories originate from a well-crafted protagonist that captivates the audience and makes them want to follow along throughout the journey.

Think of your favorite heroes: Indiana Jones, Ellen Ripley, Jack Sparrow, Harry Potter, and many others. There is something that makes these characters inconceivably relevant, likable, and sympathetic. But how do you achieve this response as a writer?

This article will give you a step-by-step guide on how to write a well-rounded protagonist for your story.

How to Write a Hero Protagonist

Let’s start with the basics: how do you define a hero?

In a classical sense, your hero or your protagonist is the main character of your story, who needs to undertake a journey into the world of the unknown to accomplish their goal through transformation and sacrifice.

Metaphorically, the hero becomes a conductor of the audience that takes them on an adventure. This is why it is significant to establish a strong connection between your protagonist and the viewers.

When developing your hero, your primary goal should be creating a character that your viewers will want to set on an adventure with. It is not a simple undertaking to accomplish, and therefore planning, outlining, and early development of your protagonist is the key.

When it comes to the world of screenwriting, there is a limited time frame in which your audience will get to know the protagonist. Unlike thousand-page novels, feature screenplays are bound to approximately 110 pages, which means you do not have that much time to enact heroic traits. Character establishment must be approached economically and with thorough attention to the details.

There are five elements when writing a well-rounded protagonist that must be considered before you start putting pen to paper.

1. Set a Strong, Primal Goal For Your Hero

There is absolutely no way to write a multidimensional and relatable protagonist without giving them a solid primal goal. We are all humans, and on a subconscious plain, we share similar, primal goals; within us, there is a universal longing for basic needs and urges. On an instinctive level, we all want to be loved, healthy, happy, and protected from the adversaries of life.

Understanding these universal, primal principles can help you in assigning your hero a proper goal. When your hero possesses a strong and universal goal that everyone can somewhat relate to, you accomplish creating an empathetic connection between the protagonist and your viewers.

In the words of Blake Snyder, one of the most renowned screenwriting theorists, “the motivation for a hero to succeed must be a basic one.” Snyder believes that it is precisely these primal urges that genuinely grab our attention and helps the audience to sympathize with the protagonist.

Here is a list of the four most commonly used primal goals.

This primal need is as old as time and has been used throughout the centuries as one of the most desired protagonist goals. We all search for the sense of longing, for the feelings of love, for the passions of sex, and a long happily-ever-after life with our soulmate. The conquest for love needs no explanation since it is a feeling that drives all of us. Think of all the stories that either follow a restricted relationship between two lovers or where one of the romantic partners attempts to win the hand of their concubine.

Survival stories are related to a universal instinct: a desire to live. These are the stories where your protagonist is doing their best to escape impending doom and protect their life. War films, horror films, thrillers, dramas, adventure, and crime films are all related to a recurring theme of life, death, and everything between it.

A fact about revenge stories: they never get old. The desire for revenge is intrinsic in all of us, the same way we experience hunger, lust, or misery. It is a primal emotion that is hard to rationalize, although it is present in all of us to a certain extent.

Power is essentially a desire for strength, love, control, and protection. Just like in the case with all the above-mentioned primal needs, power needs no need in explaining. Sooner or later, each one of us will want to experience a feeling of power. Power over others or our destiny is an effective motivator.

Now that you have a primal goal for your hero, for dramatic tension to be adequate, there needs to be a powerful opposing force to your hero’s desire to succeed.

The most obvious obstacle that main characters usually encounter throughout their journey is known as the antagonist. An antagonist is a character in a story that is presented as a chief foe of your hero.

Powerful antagonists usually represent the opposite side of your hero. Antagonists are either walking manifestations of protagonists’ fears or completely reversed projections of your protagonist. Whatever they are, antagonists must be the first and foremost obstacles that prevent your hero from fulfilling their destiny by accomplishing the goal.

A lot of screenwriters decide to label antagonists as evil or hateful. However, antagonists that truly stay within the memory of audiences are the ones that possess a strong primal goal within and are more complex than solely good or bad.

An antagonist does not need to be a particular character. Forces of nature, sometimes animals, or life itself can be your hero’s main adversaries. For example, in Michael Bay’s Armageddon, an antagonist is a massive asteroid flying towards our planet, in Spielberg’s Jaws, the biggest foe is a massive great white shark, and in The Final Destination series, death itself is haunting the film’s characters.

No matter what you decide for your antagonist to be, as long as they somehow challenge the order of your hero and prevent them from achieving their goal, you are on the right track.

Apart from a powerful antagonist, there are other obstacles that a hero can face on their journey. Some of them are minor episodic set pieces that test a hero, make the film’s action more intense and suspenseful, and in most cases, help the hero to grow and self-develop. These obstacles need to be powerful and counteract your main character, yet they can never be as powerful as the antagonist.

In addition, there is another obstacle that each well-rounded hero possesses; it is an obstacle within. This brings us to the next important element of consideration: the establishment of a tragic flaw.

3. Work Out a Tragic Flaw

The best way to think about a tragic flaw is as an internal obstacle within the protagonist. The journey of your hero is truly accomplished when the main character learns how to overcome this intrinsic flaw, and as a result, seizes the goal.

The concept of tragic flaw originates from the works of Ancient Greek philosopher Aristotle. In his work Poetics, Aristotle introduces the term hamartia, which means an error or a misjudgment that eventually leads to the hero’s downfall. For instance, hubris, also known as inflated confidence or excessive pride, is one of the most well-known tragic flaws in storytelling theory. Other tragic flaws might include greed, indecision, self-doubt, selfishness, lack of judgment, and defiance of gods/science/nature.

Be careful and think thoroughly before you choose an appropriate tragic flaw for your character. Effective ones need to harden the quest for the desired need, thus adding to the dramatic tension and making an entire story more interesting.

The truth is that for any character to be well-rounded, they need to be treated like real people. Like in real life, these characters have a childhood, family, traumatic experiences, feelings, and experiences that have shaped them to be who they are.

There are multiple ways in which you can approach devising the life of your protagonist. Some screenwriters write down entire journal entries from the POV of the character and their protagonist (this technique is commonly used amongst actors as well). Others type a whole life story of their characters.

We prefer writing down a series of questions about the character’s life, and by answering them, you will be able to more or less get to know the character’s backstory. This method does not work for everybody, as certain writers prefer having a more detailed character breakdown. There is no right or wrong approach, and it is primarily up to you to understand what suits you better.

Here are some questions you might want to answer when working on your protagonist’s biography:

Knowing little things like your protagonist’s favorite breakfast is exactly what will result in making these characters more authentic and well-rounded. Most probably, this information will never be mentioned in the final version of your screenplay. However, this will give more form to the character within your mind. This, as a result, will help you as a writer to empathize more with the protagonist, and thus it will be easier for you to write them.

5. Work Out Your Character’s Arc

The character arc denotes the changes that your character experiences from the beginning until the end of your story.

When working on your character arc, the best way to do it is by outlining your character’s internal and external journey structures. You can use different formats such as Hero’s Journey, Dan Harmon’s Story Circle, or even a Three-Act Structure to test out your character’s arc. While these structures help map out an external plot of your story, they can also be utilized as a valuable tool to develop your character. For more information on screenwriting structures, you can check our detailed guide.

Think about the ways you introduce your character. The first lines of dialogue and a scene in which your protagonist is presented are the most important ones. It is vital to establish your protagonist’s objective, tragic flaw, and obstacle in the first couple of scenes that your character is introduced. Certain filmmakers have ways of achieving all of these in a single scene.

One of the biggest mistakes that beginning screenwriters make is that they solely focus on the protagonist and forget about all the other characters. A truly good screenwriter has an eye on all the minor characters and thus tries to create somewhat of a compelling and enlightening arc for all of them.

Now that you understand these five components you need to write a well-crafted protagonist ask yourself the following: how relevant is this character to my own life?

Screenwriters say that the most interesting stories are the most intimate. When you write your next hero, take all of our steps into consideration, but most importantly, do not forget to add a little piece of yourself into your protagonist.

On a fundamental level, all characters are reflections of the writer: either as an idealized version or a largely deglamorized one.

When you take all of the points mentioned above into the deliberation and see how all of these fit within you, you will write a truly well-rounded protagonist.