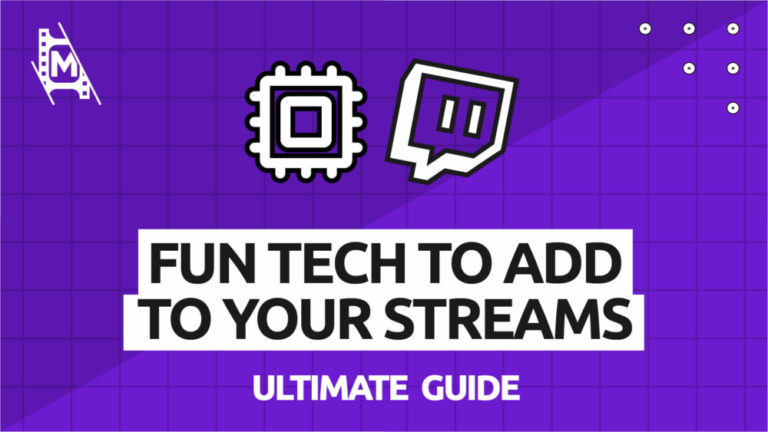 While Twitch streaming has grown to be a million-dollar industry, it is primarily about having fun. And like all platforms, technology is rapidly transforming the way it operates, both from within Twitch and due to the growing market of third-party plug-ins, accessories, and equipment.

Chat commands, alerts, hotkeys, light pickers, and animations are some of the digital tools commonly available to personalize and enhance the user experience. While devices such as digital signs, LED lighting, and neon screens are growing very popular for streamers who want to stamp their creative individuality on their content.

Attracting users to your Twitch stream is half the challenge and keeping them there is the other. We’ve been looking at some of the technology that maintains the fun of Twitch while optimizing its performance and visibility for users.

Instead of consuming content passively, Twitch viewers can now be given tools to control smart lights, OBS scenes, and sources, smartplugs, alerts, bits, and even channel points.

There’s a lot of research showing that interaction is the number one priority for potential viewers of your Twitch content, so this would be a smart plan. After all, interactivity is the whole point of streaming or else you could just watch a prerecorded video.

Let’s now look at some cool technologies you can add to your live stream to make it more engaging and help you grow your channel.

Digital signs are a gift to streamers. They are used for displaying content on multiple screens using an embed code. Many stores and events venues use digital signage to alert customers and provide product information. News feeds are a common feature, too, and have become very widely used in schools and colleges.

Twitch is a perfect fit for this technology. It enables what’s known as the ‘second screen experience’ in gaming and quizzing, in which one Twitch stream is viewed by several people in one location, and each viewer uses their own device to respond, comment, or chat. The element of interaction and control by chatters is irresistible

Several kinds of proprietary software exist which allow you to stream video from the Twitch platform, turning the viewing experience into a social one of watching people play games.

All you need is a digital signage player, compatible software with a supported feature package, an internet connection, and access to Twitch of course.

If you’re setting up a game room, you want it to look fresh, fun, and original. There’s an awful lot of competition for the attention of gaming audiences, so you need to stand out.

Installing a neon wall light in your set-up creates a cool effect, transforming an ordinary den into a hub of contemporary tech.

It gives enough light to play with without distracting from the screen. There are plenty of manufacturers producing off-the-shelf and bespoke options, so you’re only limited by your imagination. There is also the alternative of faux neon signs made from LED material. These are flexible, and you can shape them as you please, into images or messages. Be creative, clever, and amusing.

LEDs are also excellent as part of the interactivity of streaming. Allowing viewers and chatters to alter lighting through chat commands provides them with a personalized experience that can only enhance their time watching your channel.

Once upon a time, not so long ago, people tuned into the radio to hear new music, but streaming is challenging the dominance of the old medium.

If your Twitch channel is already based on musical performance, then you won’t need telling this – but if it’s not, you really need to explore the idea.

Whether you’re gaming, chatting or anything else, musical accompaniment is a must. There’s plenty of royalty-free music to be had if you search on Google, but it’s also easy to find up-and-coming artists only too happy to let you share their music if it means they’ll benefit from increased visibility.

If you’re investing in digital signage and other tech equipment to make the most of your Twitch streaming, you’ll want to be sure to draw a crowd.

One of the most effective ways of doing so is to use short-form videos. This doesn’t mean going for short form on Twitch – that would defeat the object. We’re talking about using other social media platforms where short-form is all the rage, like TikTok and the others we mentioned earlier.

You should invest in a simple editing software suite that allows you to clip highlights and teaser moments, just as in movie trailers. Put together 30-second teasers of some of your Twitch highlights, load it up with the appropriate hashtags and links back to your Twitch channel, then you’ll really see your community of viewers and fans grow.

We hope you enjoyed our list above and that you found some fun tech for your next live stream.

Always feel free to try new tech, features, and such on your streams. Remember that if you are having fun, your viewers will probably too.