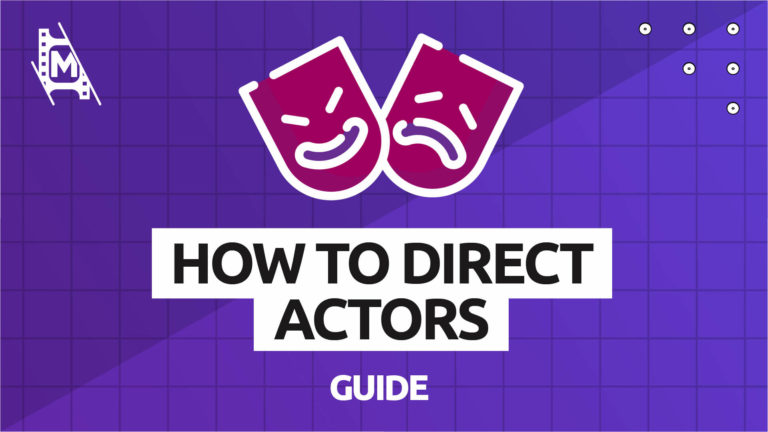 How do you, direct actors?

It’s a commonly asked question and rightly so. The relationship between director and actor is the most integral to any production. Working with actors is a challenge you must tackle on set but this guide should provide enough tips to set you on your way

Be Clear in Your Directions

Many directors struggle with clarity when it comes to how to direct actors. The relationship between actor and director is all about communication. Without clarity, you won’t be able to transfer your ideas across to your actors. This results in poor performances across the board.

How do you find clarity?

By being explicit with your intentions.

Don’t assume your actors are mind readers. Illustrate how you want your scenes to unfold because as director, you call the shots. Actors are expecting you to lead the way.

Concise direction is a mark of a professional director with a strong command of the craft.

Imprecise directing is a tell-tale sign of the inexperienced filmmaker. Imprecise filmmakers are usually the same directors who get enraged at actors who fail to hit their marks.

How can they hit their marks if they haven’t been defined? Of course, this is not to say that you must impose a stringent approach to directing actors.

This isn’t not allowing actors the freedom to experiment and explore their range.

This does not mean several hours of devising written character breakdowns. Paint a picture in the actor’s mind. Bring the actors into your world and how you see it.

For example, say you have a scene in which a character should display sadness. Your actor is struggling to present the emotion and you want to bring the sadness out of him. It would not be wise to say “try and look sadder”.

Think about what you’re asking of an actor.

How does one try to look sadder?

Trying more doesn’t usually result in better performances. Great acting is about being and becoming. Inspire to let your actors become the character through visual cues. Don’t bark orders at them. A successful director-actor dynamic is a dance and it requires movement from both parties.

How could you direct this scene?

Ask your actor to think of a real-life scenario where they experienced sadness. Let them channel that into this scene. As you gain more experience directing actors, you’ll realize that you can’t micromanage their performance.

Let your actors dance with their emotions.

Actors are precious creatures. You have to remember that actors are people that have to chosen to pretend to be other people for a living. This requires a certain temperament and personality.

Thus, you cannot treat actors the same way you treat other members in your production. This isn’t to say that actors deserve higher levels of respect. They simply deserve a different approach.

Actors are a big reason why the average viewer watches films. Actors come second to only the story. Most non-industry people discuss films as follows.

Actors reign supreme. It’s to the extent that casual filmgoers typically view actors as the auteurs. Think how often you hear people refer to a “Tom Cruise movie” or a “George Clooney film”.

While it’s usually designated for the stars, it is also true of lesser-known actors.

Making actors feel comfortable is all about making the production as professional as possible.

Take care of the logistics first

Take all logistical and admin work off their hands to ensure things run smoothly.

Here’s a list of tasks your production should take care of.

Paperwork: Prep all call-sheets and schedules well ahead of time. Actors hate last-minute arrangements because it leaves them unprepared. Set the stage for the actor to simply turn up and do their job.

Timing: Hire a great first AD to make sure you don’t go overtime. Working longer hours results in tired performances. It’s not a concern if your runner starts to tire but trust me, you don’t want your main actors yawning between takes.

Catering: Feed them well, and on time. Don’t let your actors wait for even a second to eat. Actors are the athletes of film shoots. What they eat is also important. Pizzas are no-gos as they can make actors sluggish.

I’ve been on a few unorganized sets and it’s always the actors that suffer. They suffer because production failings cause distractions. Distractions are a recipe for poor performances.

Do you want to make your actors feel comfortable on set? Hire a great producer that knows how to run a steady ship.

A rehearsal is a formidable weapon in your directing arsenal. Many directors forgo the rehearsal in favor of getting right to shooting.

I’d strongly advise against this.

Let’s use the actor as an athlete analogy again.

You wouldn’t send a professional sprinter onto the track without a warm-up, would you? So don’t send your actors to work with the camera before they’ve worked on their characters off-camera.

A table read is the first type of rehearsal you should do with your actors. It consists of you sat around a table with your actors, reeling off lines. Here, you can figure out what works and what doesn’t in terms of delivery.

For many actors, it offers them an opportunity to meet the other cast for the first time. Thus it’s a great opportunity for them to build a rapport not only with the other actors but also characters.

There are many different rehearsals that may or may not be essential. It all depends on what your production is.

If your production requires stunts, it’s near enough a legal requirement to conduct a stunt rehearsal. For these kinds of rehearsals, you essentially take a back seat. It’s the stunt coordinator that runs the show here.

This isn’t always required but it’s essential for productions that feature extravagant clothing. These rehearsals are notably prevalent in the science fiction and period drama genres. However, if you’re shooting a rom-com or mumblecore film, this may be overkill.

Again, this isn’t always needed but a camera rehearsal sometimes doesn’t even need the actors to act. It’s more for the DP and director to block the actors. The DP and his lighting team will make sure the actors hitting their marks for the final take. Some DPs refrain from doing this in favor of free-flowing camera work.

Rehearsals also offer you the opportunity to see what works in terms of the script. Certain lines work better on the page instead of in actuality. Table reads allow you to find out what kind of line delivery your actors need but a rehearsal will expose whether lines work spatially.

It’s one thing for a line not to work at the table but it’s completely different when actors are making use of physical space.

This sounds counter-intuitive. But it really isn’t.

In a sense, people take the idea of “direction” too literally. You shouldn’t direct actors by telling them what to do. In essence, you’re their tour guide into your world. You as the director are there to guide the actors along the right path.

You can do this by not actually directing them at all.

Ask them how they view the scene. How they would play with the character. This technique is commonly used with actors that like to dominate. Think of actors like Anthony Hopkins or Morgan Freeman. You hire these actors because they bring a certain gravitas to the role.

These actors should be treated as collaborators more than anything else.

I was listening to Alex Ferrari’s Indie Film Hustle podcast where he spoke about a filmmaker who hired John Malcovich for his first film.

The director approached Malcovich and asked, “How do you want to work?”

Instead of imposing your style upon an actor, you let them input some of theirs.

When hiring an established actor you may want to adopt a level of transparency you can’t provide the other actors. Let’s be real, they’re a lot more experienced than you, have higher star power and potentially have the power to get you fired from your own film.

Let them work with you.

This doesn’t work as well when you direct younger and less experienced actors. The trouble with younger actors is that they are actually looking for a strong direction. With them, you can act almost like a sculptor, molding their performances and eventually molding themselves as actors.

In my experience, it’s the older actors that need less direction. They know what they want from the role and they know how to let the character’s shine

This is only achieved through experience.

One director who is known not to “direct” his actors is legendary arthouse director Terrence Malick. He often shoots films without a shooting script in favor of esoteric and meandering narratives.  Actors are free to roam within his cinematic worlds.

There is a certain poetic quality to improv acting. And if you were to adopt this method of directing, you’d be in good company.

Create a Fun Environment With Actors

One thing I’ve learned from working in the film industry is that actors are the artisans. It takes a certain type of person to become an actor and 90% of actors share the same commonalities.

Some are serious, method-acting types in the mold of a Christian Bale. But some are goofy, oddball types in the vein of Chris Pratt, Chris Evans, or Will Smith. Either way, you need to create a great working environment for them. This might mean changing approaches when you direct different kinds of actors.

The tips vary depending on the type of actor:

Give them ample space and more time. If they need an extra 10 minutes to work on their character in their dressing room, so be it. Make sure you spend time talking to them one-on-one a lot more than in a group. These are typically introverted actors that really become one with the characters.

This does provide a few problems, especially with scheduling and ego management. But the performances you can get out of these actors are worth it.

These are the actors that win Oscars.

For them, being on set isn’t only work, it’s a social occasion. If anything, a serious set hampers their abilities.

To create the best environment for them, you need to make it fun. Be playful with them. Joke with them. Many of these actors naturally veer towards comedy but you can find them in any genre.

After years of being on film sets, you start to realize that they are nothing but large dysfunctional families.

Actors are the weird but gifted kids in the family and to make them prosper you want to get your house in order.

You should now have enough to feel more comfortable knowing how to direct actors. But remember that nothing compares to the real thing. Revel in the uncertain challenges that will be thrown your way as a director.