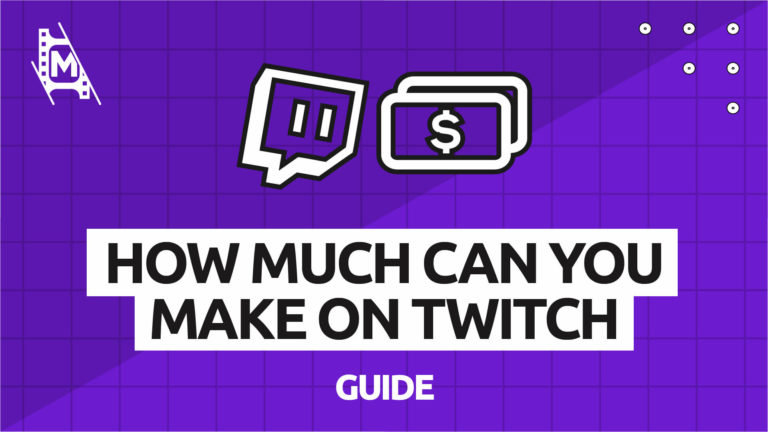 Twitch is more than just an entertainment platform. For many people, live streaming is their primary source of income. Many streamers on Twitch make a living by streaming and earn a substantial amount of money through the site.

Of course, this is not the case for everyone. Many factors contribute to how much money a Twitch Streamer makes. In this article, we will answer how much money you can really make on Twitch.

If you want to learn more about streaming, check out more of our articles and guides below:

Can You Make Money on Twitch?

While streaming on Twitch may seem like just a way to make a little side cash, many people are on the platform who make serious money.

How much money you make as a streamer depends on how much work you are willing to put in. Professional streamers who stream 40 hours in a week can make up to $3,000-$5,000 in a month, not including ad revenue or sponsorships. This translates to about $36,000-$60,000 a year.

The more advertisements and sponsorships that you pair with your Twitch channel, the more money you are likely to earn on top of the income you make with regular streaming.

$3,000-$5,000 is a lot of money to most people and is easy enough to live on depending on your area. However, some people make significantly more or less money depending on how many subscribers they have and how often they stream.

Advertisements, views, and subscriptions can be the biggest contributors to a streamer’s income. Naturally, streamers who have a lot of popularity on the platform will make more money than those starting. But not everyone who makes a living off of Twitch is extremely popular.

How Much Money Do Top Twitch Streamers Make

As of 2020, here are some of the top-earning Twitch streamers to give an idea of how lucrative the platform can be.

Also known as xQcOW on Twitch, Felix Lengyel comes in first as he has managed to make 1.98 million USD in the year 2020. This translates to roughly $165,000 a month.

Ronnie Radke is another well-loved streamer on the platform. His username is RonnieRadkeOfficial, and he made 972,000 USD in 2020, or about 81,000 USD a month.

While almost any activity can be streamed on Twitch, it should be noted that most of the highest-earning users are avid video game players. If video games are not your style, this doesn’t have to be a roadblock for you.

How to Make Money Through Twitch Affiliates

It is entirely possible to make money on Twitch, but there are a few things to be aware of before quitting your job to be a Twitch streamer.

The most common way to start earning revenue on Twitch is to become a part of the Twitch affiliate program.

Being an affiliate will allow you to make revenue off of your streaming. To apply, your Twitch channel must first meet the following requirements:

While that may seem like a lot to have to do to get started, the process is much more straightforward than it initially appears.

Anyone who is affiliated with Twitch will be able to earn money through their streams. This money can come from the views that you receive. Your audience can also purchase “bits” or gifts that they can give you. These virtual gifts will translate into profit when you receive them. For every bit a streamer earns, they will make one cent.

As a Twitch affiliate, you will also be able to make money through advertisements. These advertisements can also double as a way for the streamer to take a small break without leaving an empty screen. However, be careful not to use too many advertisements. Doing so can result in an unhappy audience.

Another way that you can make money as an affiliate is through subscriptions. When people subscribe to your Twitch channel, they will be paying regularly to have constant access to your channel. There are three levels of subscriptions available:

As subscriptions can make up a large part of a streamer’s income, it is important to strive to get a good amount of subscribers.

How Much Do Twitch Affiliates Make Per Sub?

Twitch Affiliates can get up to a 50% cut of their subscription payments. This means that, if you have 1000 subs paying $4.99 a month, you get paid roughly 30k a year.

Wait for Your Payout

Once you have applied to be a Twitch affiliate and you have been accepted, you will need to wait a little while before you can access any money you make.

Twitch’s minimum payout is $100, and new affiliates will have to wait for their payout 45 days after the end of the month they get approved for their affiliation.

It’s essential to remember that Twitch will not be an immediate income source like many other freelance jobs. Even the biggest streamers had to build their audience and career for a bit before enjoying their profit. As a result, you may be waiting a little while before you see the kind of money that will support you without the need for a second job.

Additional Ways to Make Money as a Streamer

Most Twitch streamers don’t solely rely on Twitch Affiliates for their income. There are additional ways to monetize a Twitch channel as well. These include:

PayPal Donations – Set up a PayPal donation button on your stream where users can donate directly to your PayPal account.

Patreon – Patreon is a platform where fans can support their favorite content creators through donations. In return, supporters get exclusive content rewards and perks.

Affiliate Links – Another way to monetize a Twitch channel is through affiliate links. Viewers can click on an affiliate link to purchase a product you promote, earning you a commission.

Merch – Merchandise is a great way to monetize a channel. This way, viewers can support your work by getting a cool t-shirt, mug, wristband, or another piece of merch.

Sponsorships – Content creators with larger followings can make sponsorship deals outside of Twitch, where they promote products or services relevant to their topic and audience.

There are many ways to make a living off of Twitch streaming, but it won’t be easy work.

While running a Twitch channel is easy in and of itself, making a living wage off of the streaming platform will take dedication and an ability to connect with your audience.

If you dedicate your time and effort to your live streams, you can absolutely make a living through live streaming. While you might not become the next ninja, you can still earn a great income doing what you love!